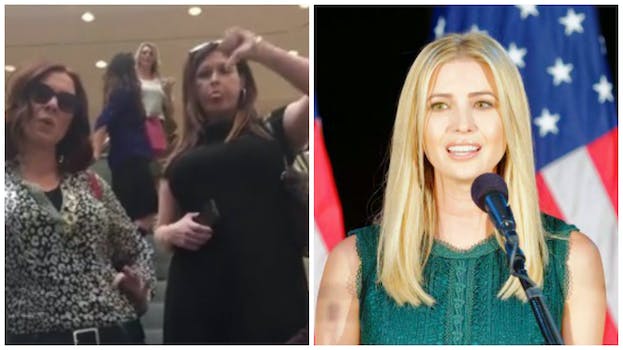 'Headed to Dillard's to buy all kinds of stuff.'

When Nordstrom pulled Ivanka Trump’s clothing brand off the shelf, President Trump attacked on Twitter. But aside from a brief drop on the stock market, the department store quickly recovered and actually seemed to benefit from the controversy.

But not everybody is pleased with Nordstrom (and probably Sears, Kmart, and Burlington Coat Factory for making similar moves) taking a stand against Ivanka’s shoes and clothes. Some, in fact, are really pissed about Nordstrom’s decision.

Like this group of Arizona women who recently stormed into a Nordstrom to dump the department store and close their accounts. Here’s the Facebook video—with some clever hashtag wordplay—from a woman name Laurie Ray.

On Thursday, she posted this message to defend herself and the video—which, as of this writing, had racked up nearly 550,000 views since it was posted on Wednesday.

Bad for Nordstrom, one supposes. But this is great news for Dillard’s, which apparently has a few new customers. But the reason Nordstrom (and Sears, Kmart, and Burlington Coat Factory) dropped Ivanka in the first place was because of poor sales. As the store told Fox Business, “We made this decision based on performance. Over the past year, and particularly in the last half of 2016, sales of the brand have steadily declined to the point where it didn’t make good business sense for us to continue with the line for now.”

If that’s the case, Ray and her friends should buy up as much Ivanka merchandise as possible. At this rate, it wouldn’t be a shock to see her clothing line disappear altogether.