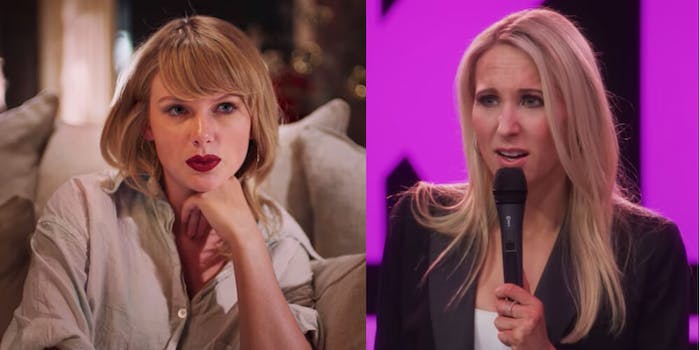 Netflix Is A Joke/YouTube Netflix

The comedian revealed in her apology to Swift that she's 'only got a couple death threats.'

About an hour into the film, there’s a montage of clips from women making snide comments about Swift. Among other things, they call her “annoying” and joke about the men she’s dating. In Glaser’s case, she calls Swift “too skinny” and says that a person would have to “have a thigh gap to hang out” with the singer.

Swift uses this part of the film to explain why she needed to escape the spotlight for a year. But contrary to the song, Glaser wants Swift to know that she’s sorry.

“I love @taylorswift,” Glaser, 35, writes on Instagram. “Unfortunately, I am featured in her new documentary as part of a montage of asshats saying mean things about her, which is used to explain why she felt the need to escape from the spotlight for a year. It’s insanely ironic because anyone who knows me knows I’m obnoxiously obsessed with her and her music.”

Glaser also says she was “jealous” of Swift.

“This quote should be used as an example of ‘projection’ in PSYCH101 textbooks,” she adds. “I was probably ‘feeling fat’ that day and was jealous … And I was only bothered by her model friends because I’d like to be her friend and I’m not a model.”

Glaser revealed she’s “only got a couple death threats from die-hard Swift fans” after her remarks were made public by the release of the Netflix documentary on Friday. She also said, like Swift, she’s been “battling some kind of eating disorder for the past 17 years.”

“Wow. I appreciate this so much and one of the major themes of the doc is that we have the ability to change our opinions over time, to grow, to learn about ourselves,” Swift commented on the post. “I’m so sorry to hear that you’ve struggled with some of the same things I’ve struggled with. Sending a massive hug.”