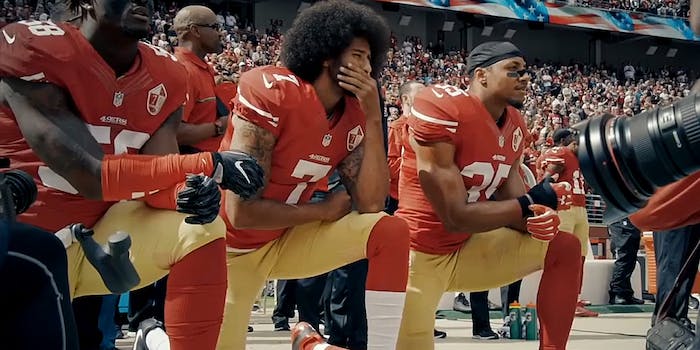 Forget the president's tweetstorms, and let Black people lead the narrative on race.

Over the past few days, in a display of solidarity, NFL players have opted to take a knee or remain off-field during the “Star-Spangled Banner”—an ongoing protest against racial inequality and violence. Initiated by former 49ers quarterback Colin Kaepernick, who began sitting out the anthem in 2016, the protests have stirred controversy nationwide.

For some, it is a matter of “respecting the flag,” with a player’s refusal to stand for the anthem a sign of blatant disregard. For others, a player’s (or even a coach’s) decision to participate is absolutely necessary in bringing to light the injustice faced by Black Americans. Regardless, there is one thing we could all probably agree on: The NFL’s nationwide display of activism is historical.

When Black NFL players took a knee or refused to take the field during the “Star-Spangled Banner” on Sunday, they reclaimed America’s race narrative on a national stage, perhaps in one of the most visible moments for Black activism since the Civil Rights movement. Ever since, #TakeAKnee has been nearly all the media and President Donald Trump has been consumed with—because such mainstream activism and attention toward racism is that unprecedented.

However, that doesn’t mean that the white-led race narrative is dead. When the president and conservatives try to make these peaceful protests about “respect for the flag,” you better believe that these false parallels are an attempt to reinforce the racial hierarchies that suit their white-centered worldview. Which is why we can’t let the NFL’s or the country’s right to kneel be about standing against the president and his overactive Twitter account—this would center the narrative on a white man who has great disdain for Black people. It has to stay focused on our country coming to terms with how it treats Black Americans.

Let’s look at the history of the white-dominated narrative to understand how we got here. Thomas Jefferson was one of America’s first figures to have a major impact on race theory. He married the idea of race with a biological and social hierarchy, creating a racist social ranking that would be reinforced over generations. “Blacks, whether originally a distinct race, or made distinct by time and circumstances, are inferior to the whites in the endowments both of body and mind,” Jefferson wrote in 1776 in Notes on the State of Virginia.

These beliefs went on to have an indelible impact on scientists who went on to develop their own racial theories. In 1779, German scientist Johann Blumenbach first introduced a race-based classification of humans, which established a framework for analyzing race and racial differences for the next hundred years. Such classifications were eventually used to justify slavery and create stereotypes. In 1851, a physician named Samuel Cartwright coined the term “drapetomania,” which branded slaves’ efforts to run away and escape servitude as a form of mental illness. In his worldview, Africans were mentally unfit for self-determination, so, of course, they simply had to be crazy to try to escape.

While his “science” has since been debunked, stereotypes endure that label Black assertiveness as “crazy” or “dangerous,” whereas white assertiveness is seen as simply being a “good leader.” This stereotyping was even invoked in response to Black Lives Matter, which has been called a terrorist organization for simply asserting that Black lives are important.

On the other hand, Black participation in the race narrative has always looked quite different. The ugly reality that emerged out of centuries of white supremacy threatened not only the freedom, but the life of African-Americans, forcing Black people to stand in defiance in order to protect and advocate for themselves.

Through early movements like abolitionism, Black people fought with allied whites to counter racist stereotypes and draw support to be emancipated from slavery. When the enslaved were finally freed in 1863 by the Emancipation Proclamation, whites again yoked back control, enacting Black Codes and Jim Crow Laws, which segregated public spaces and forced Black people to accept jobs at low wages, among other travesties, or risk imprisonment. The hierarchy had to be maintained.

It wouldn’t be until the 1950s and ‘60s, that Black people would gain control over the race narrative in America once more. A wave of activism took the nation by storm, with prominent Black leaders stepping into the forefront with conversations about racial inequality. As a result of the Civil Rights era, America marched toward “racial harmony” through desegregation and laws to combat inequality. However, borne from that very same movement was an ideology that would stunt American progress for decades.

Racial “colorblindness” was most notably espoused by Martin Luther King Jr., who had a dream that he would live in a nation where people would “not be judged by the color of their skin, but by the content of their character.” The idea that one should not “see” race came to dominate racial discourse, but not in the way Civil Rights leaders envisioned. The racist structures of America remained—employment discrimination persisted, redlining continued to force people of color into poorer neighborhoods, the wealth gap continued to widen—and yet Americans were infatuated with the idea of not seeing color.

Colorblindness became the bastardized child of the Civil Rights movement, propagated by American culture and its educational systems that claimed racism was a thing of the past now that Blacks didn’t have to sit in the back of the bus. History books would teach generations of children that Martin Luther King’s dream was somehow made a reality; the election of Barack Obama, the proof of its fruition.

In 2008, a Forbes writer declared “Racism in America Is Over”:

“So, in answer to the question, ‘Is America past racism against black people,’ I say the answer is yes. Of course, nothing magically changed when Obama was declared president-elect. However, our proper concern is not whether racism still exists, but whether it remains a serious problem. The election of Obama proved, as nothing else could have, that it no longer does.”

Many whites, both liberals and conservatives, agreed. America was not only colorblind, but also post-racial.

But now, with Trump in office, making excuses for white supremacists and advocating for police brutality, the colorblind-ers have been removed, so to speak. It’s no longer easy for white liberal America to deny we have a race problem.

So here we are again, with Black people leading the charge to confront inequality, except this time it’s on NFL Sunday. Black athletes and activists are usurping control of the race narrative to make the nation aware of one plain fact: We still have a long road to creating the fair and equal society leaders like MLK dreamed of.

However, with every march and every protest lead by Black people, America, once again, takes another step toward finally realizing that dream. It’s up to us as a nation to accept and embrace this important leadership. Let’s have the conversations, legislative actions, and reckoning of the past that peaceful protest hopes to incite—and let’s have it led by the people who know best what it’s like to suffer from the affliction at hand, Black people.

Let’s not let this race narrative be controlled by a businessman who came to fame turning away Black tenants, a man who begs for your attention on Twitter. Protesting racism has never been the problem. As the late great Frederick Douglas once said: “The thing worse than rebellion is the thing that causes rebellion.”