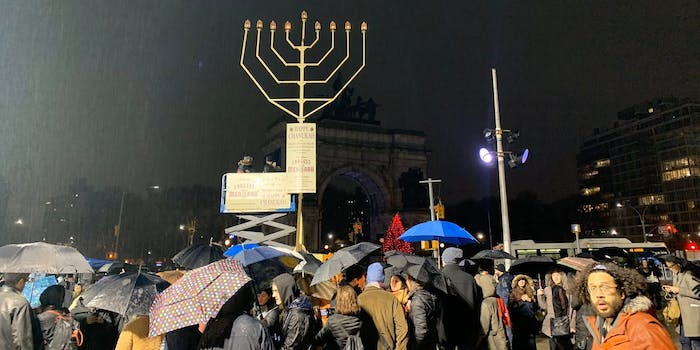 The rally comes after attacks on members of the Jewish community.

The holiday season in New York City was tainted by a series of anti-Semitic attacks this month—and citizens of all faiths pushed back in solidarity on Sunday by lighting the largest menorah in Brooklyn.

Most recently, the stabbing inside a Rabbi’s home in Monsey, New York, has put the Jewish community even further on edge.

On Saturday, as the Jewish community observed the seventh day of Hannukah, a man reportedly entered the home of Rabbi Chaim Rottenberg and stabbed five people. A suspect has since been arrested, according to CNN.

It was the latest in a string of attacks against Jews in New York that mired the Hanukkah spirit for many. As CNN reports, the past week witnessed almost daily attacks on members from New York’s Jewish community.

The attacks varied in nature, from attacks on the elderly to kids as young as 6 and 7 years old. In many of the attacks, there were explicit threats to Jews or racist remarks about the community.

On Sunday, after news of the Monsey attack broke, Jews in New York rallied in Brooklyn’s Grand Army Plaza in response to anti-Semitism.

Trying to warm up after the moving but cold and very rainy menorah lighting tonight at Grand Army Plaza has me thinking about the meaning of solidarity in the current moment. 1/ pic.twitter.com/lzjCjj2hhY

Last night, thanks to Jewish organizers & our allies, I attended a vigil at Grand Army Plaza in honor those slain in Monsey & beyond. Then I went to MSG to see Phish, unapologetically wearing my favorite Phish T-Shirt. Holding space for light in the darkness & liberation for all. pic.twitter.com/yN9JkkJDMs

Photos on social media showed members from the community braving the rain to sing and dance around the menorah.

Our Jewish community is still mourning the violent antisemitic attack in Monsey.

But we are committed to joy, to resilience, to Jewishness.

Bend the Arc, a Jewish advocacy group, wrote that “the largest Menorah in Brooklyn” was lit in solidarity with the Jewish community.

Tonight, hundreds of us gathered at Grand Army Plaza to mourn antisemitic violence & celebrate Hanukkah together.

The Largest Menorah in Brooklyn is now shining bright & proud, just like our Jewish community.

Love & solidarity to Monsey and our entire Jewish family. pic.twitter.com/bYYB22RX3S

It was sparked following a tweet from activist and organizer Jason Rosenberg.

“How about we all join together tonight in solidarity with Monsey, and every Jewish community?” he wrote in a tweet on Sunday morning.

Brooklyn, there’s a 32-foot menorah that lights each evening of Chanukah at Grand Army Plaza at the tip of Prospect Park. How about we all join together tonight in solidarity with Monsey, and every Jewish community?

In two hours, the event was official and Rosenberg announced it on his Twitter. Organizations such as Bend the Arc and Jews for Racial and Economic Justice (JFREJ) contacted him, and became official organizers, Rosenberg told the Daily Dot.

On Sunday afternoon, “Grandy Army Plaza” trended on Twitter as people across the city prepared for the rally and spread awareness about it. Between 300 to 500 people showed up to the rally, Rosenberg said.

We are meeting at Grand Army Plaza (near the entrance of Prospect Park) at 5:00 PM, official lighting at 5:30 PM.

“Between rain, people of all faiths and diverse walks of life came together in song and celebration of the final night of Chanukah but also with calls to action to confronting antisemitism,” Rosenberg told the Daily Dot via email.

But Rosenberg says he does not agree with de Blasio’s earlier announcements of increasing cop presence.

“This will not help Jewish folks, only hurt and harm Black and brown communities,” he said, sharing a photo of him confronting de Blasio about it at the rally. “Especially Black and brown Jews who have continued to be erased and ignored in the dialogue.”

“We still have work to do,” Rosenberg added. “Only solidarity will help us through these rough and difficult times.”