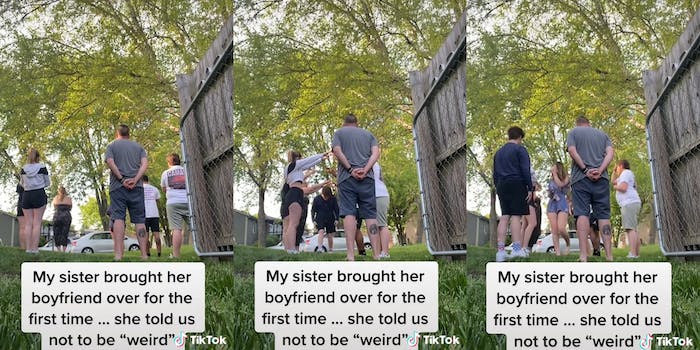 Girl brings boyfriend to meet her family for first time, asks them not to do anything ‘weird’—it backfires

When one TikToker’s sister asked her family not to “do anything weird” when she brought her boyfriend home for the first time they knew they had an opportunity not to be missed, and met her boyfriend outside with an exceptional greeting.

Standing in the front yard in formation, all facing the street, @courtneywinters family waited for her sister’s car to approach. When the vehicle came in view they arranged themselves into a human tunnel, arms raised and joined as the roof – except for her father, who stood with his arms clasped behind his back at the end of the tunnel, waiting expectantly.

Commenters said, “It would have been funnier and more weird if they started chanting in a circle.” Courtney replied to the comment, noting they considered this option.

One comment read, “the council will decide your fate vibes.” Another said, “BRO GET OUT.”

Winter’s sister and her boyfriend got out of the car, with her boyfriend running through the human tunnel with jazz hands and a smile.

One commenter said, “I WOULDA PUT THAT CAR IN REVERSE SO FAST.”

Winter’s sister followed, albeit with her hands over her face in embarrassment.

One commenter found the gesture cute, saying, “This is something my family would do, looking back now i love this so much.”

Another took the opposite stance, saying, “This is what my family would do. It’s also why I will never tell them I’m in a relationship until I am giving them a wedding invitation.”

While some were impressed that her boyfriend didn’t just book it out of there, he was not without his critics. One viewer said, “I would drive off like oops wrong house lmfao.”

Other viewers were disappointed that the new boyfriend didn’t shake her father’s hand, instead just standing beside him. One viewer asked, “Where was the handshake for dad!!!” Some viewers came to his defense, noting that this experience may have confused him.

At least one commenter thought the relationship was clearly made to last, with one TikTok user saying that the family would be reenacting this year down the line at the teenager’s eventual wedding.

The Daily Dot has reached out to @courtneywinters for comment on this video.