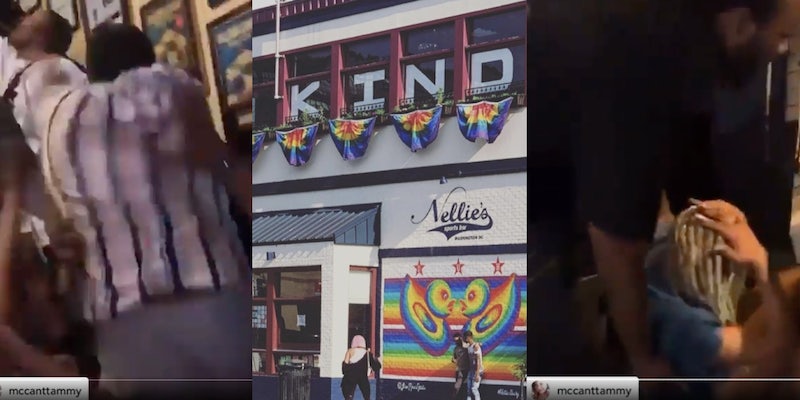 The bar announced it would close for a week to 'evaluate this regrettable situation.'

Protesters are calling for action, not just statements, after a video was released that appears to capture a security guard pulling a Black woman down a flight of stairs at a popular gay sports bar in Washington D.C. The bar stated it has since fired the security firm involved.

The cellphone video footage, which was posted early Sunday, shows the alleged victim, 22-year-old Keisha Young, being forcibly removed from Nellie’s Sports Bar. The video quickly went viral and locals gathered to protest outside of the bar on Sunday evening.

In the video, patrons can be heard yelling, “Oh my god,” and a few onlookers—later identified as Young’s cousins—jump in. A fight then ensues between them and security.

The LGBTQ community in D.C. has been vocally outraged on social media following the incident, asking members to rally around Young and boycott the bar. During the Sunday evening protest, Young was able to retrieve her phone, but not her missing glasses, from the bar, reports Washington City Paper.

Nellie’s disabled comments and released a statement on Instagram shortly before the protest:

“We were incredibly upset and disturbed to see the unfortunate event that took place at Nellie’s last night. We are undergoing a full investigation of the situation. At Nellie’s we foster an inclusive and safe environment, so events like this are completely unacceptable to us.”

A day later, the statement appeared to have been removed and replaced with a new one saying that Nellie’s had fired the security vendor involved in the alleged incident. It also announced it would be closing for the week to “evaluate this regrettable situation”:

“Nellie’s Sports Bar has terminated, with immediate effect, the independent security vendor hired to protect our guests during Pride Week. Our investigation into the matter is ongoing, and we will cooperate with any law enforcement investigation, however we do not need to wait for the investigation’s conclusion before we take decisive action. We offer a heartfelt apology to all who witnessed the horrific events of this past weekend. No matter what behavior occurred prior, nothing warrants mistreating, and disrespecting, one of our guests.

“What we can say is we have heard the concerns of the BIPOC and LGBTQ communities. Nellie’s will be closed this week as we evaluate this regrettable situation, though we will continue to pay all non-security staff their normal wages. In the interim, we will use this time to listen and understand what more we can do to create the safe and friendly atmosphere our guests have come to expect from Nellie’s Sports Bar over the past 14 years.”

After the statement was revised, comments were briefly allowed under the post, many of which called for the bar to be shut down completely. Comments were then disabled and disappeared once again.

“Close THIS RACIST ASS SPOT DOWN!!! PERIOD,” commented @missburkes before the section was removed.

“There is a reason that this security guard felt secure enough to behave this way at your business. It’s more than surface level concerns here. Feel free to take more than a week [and] truly think about what needs to change. If your staff isn’t truly diverse then it’s an owner issue not just security,” commented @aso_sneakerhead.

Young has started a GoFundMe with a goal of $75,000 to help pay for therapy, medical bills and legal fees.

According to NBC Washington, a spokesperson for the D.C. Alcoholic Beverage Regulation Administration said the agency will investigate the incident.

Young’s family has hired attorney Brandon Burrell and is pursuing a civil claim as well as considering filing a police report, according to Washington City Paper. Young is claiming she was mistaken for someone else who brought a bottle into the establishment.

“The apology was really general,” Burrell told the Daily Dot following the establishment’s revised statement. “There wasn’t any apology directly toward Keisha Young [and] I was definitely disappointed by that, and Keisha was disappointed as well. I think that Nellie’s needs to release the video surveillance and to apologize directly to Keisha.”

When asked if there have been any changes or updates to legal action Burrell and Young plan on taking, the attorney said he’s still waiting to speak to Nellie’s directly.

“Before that happens I would like to talk to Nellie’s or their representative or their general counsel, which is usually how things go, but they haven’t reached out yet. They are probably going over the video themselves first.”

This isn’t the first controversy Nellie’s has caused. In 2018, the bar was criticized for flying a Thin Blue Line flag alongside their Pride flag and American flag. It subsequently released an apology, the Washington Blade reported.

The Daily Dot reached out to Nellie’s for comment.