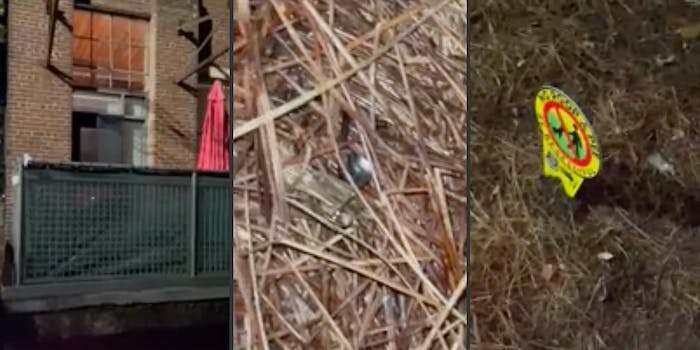 'We all know it’s him because he’s made it an issue since he moved in.'

A viral Reddit video shows a woman detailing how a neighbor has allegedly laid out thumbtacks to hurt dogs because he “hates them.”

Posted to r/iamatotalpieceofshit by u/Bigbutterybiscuit, the video was shot in an Atlanta-area apartment complex. The caption reads: “My neighbor at my apartment complex hates dogs and doesn’t want them near his porch so he laid out thumbtacks on the ground (in a common area) to hurt the dogs if they walk on the pine straw near his unit.”

“This asshole has a camera up at an apartment complex and laid thumbtacks on the ground,” says the woman, showing thumbtacks hidden in pine straw throughout a common area near the unseen man’s apartment unit.

She continues: “My fucking dog stepped on one; they’re everywhere. He just dumped an entire thing of thumbtacks everywhere…. Isn’t this illegal, y’all? I’m pretty sure it is.”

Booby-trapping is prohibited in Georgia, even in private residences. Frustration with dogs isn’t a known legal justification for the man’s alleged actions. Thumbtacks have also been found in other instances of injured dogs and children.

In response to a question in the comments, she wrote: “I want to [press charges] but I don’t think I have enough evidence to go to the police. Apartment management told me they can’t do anything about it because they don’t have evidence that he actually placed the tacks. And I just found out that 50+ (and counting) residents have complained but no one has him on video doing it. We all know it’s him because he’s made it an issue since he moved in. There are some neighbors that don’t pick their dog poop up so management put a $100 fine in place for violators. They also posted signs everywhere.

“He put up his own “no dog pee/poop” signs even though management takes them down because he’s placing them in an area that belongs to the complex (not his property). Then he installed cameras filming the area where the signs were placed and tacks were eventually found. The tacks also stopped at his property line. The guy totally did it. He’s denying it so management asked for the video from the cameras he installed and he claims he accidentally deleted it. More like he’s covering his ass.”

It’s unclear if the issue has been resolved, but here’s hoping no more animals were harmed.