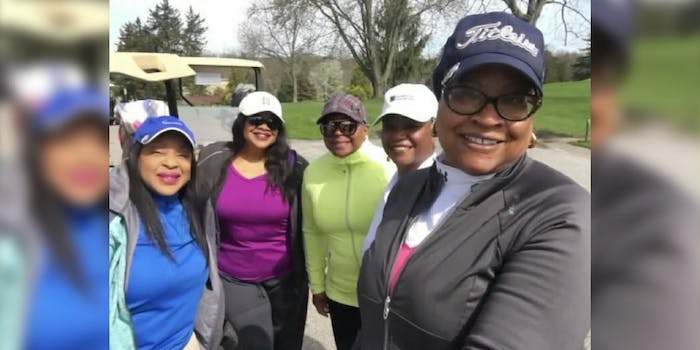 The women said they were discriminated against for golfing while Black.

A Pennsylvania golf club co-owner and his father called the police on a group of Black women on Saturday for playing “too slow.” The women said they felt discriminated against and were shaken by the experience.

According to the Associated Press, Sandra Thompson, Sandra Harrison, Myneca Ojo, and two other friends met up at Grandview Golf Club in York, Pennsylvania, to play a round of golf. The women are part of a larger local organization called Sisters in the Fairway, a group of experienced golfers that has been around for at least a decade and joined the club last year; all five golfers are club members.

However, two holes into the game, the women say former York County Commissioner Steve Chronister, the father of club co-owner Jordan Chronister, came up to them twice to tell them they weren’t keeping up with the pace of play. According to the AP, it’s custom to allow faster groups to play through slower groups if they’re holding the course up, and there are often course personnel who warn groups if they’re taking too long.

Thompson told the York Daily Record it was untrue that they were slower than average, while Harrison had asked a Grandview golf pro about the pace, who replied they were fine since they were going at the same pace as the group ahead of them.

The women then skipped the third hole to avoid any issues. The women had finished the first half of the course in under two hours, which is below average time. However, after the ninth hole, three of the women left, having been shaken over the multiple confrontations.

It’s customary for golfers to take a break before the next nine holes, but while the remaining two women took their break, Jordan Chronister, his father, and several other white men confronted them and told them they were taking too long of a break and needed to leave the course.

Thompson recorded a video of the confrontation, during which she said they took an appropriate break, and that the men behind them were still on their break, so the women weren’t holding them up. That’s when Chronister informed them that the police were on their way.

The women waited and gave their statements to police. Northern York County Regional Police Chief Mark Bentzel told AP that none of the issues warranted any charges.

JJ Chronister, who is the wife of Jordan and a co-owner of the club, said she called the women Sunday to personally apologize, stating that they were sorry for making the women feel uncomfortable and that it wasn’t the club’s intention. The club also released a statement apologizing for its lack of “professionalism” displayed in the video Thompson recorded.

“While our intention was to ensure all teams on the course were moving through in a timely manner, the interaction between our members and our ownership progressed in a manner that was not reflective of our company’s values or expectations for our own professionalism,” the statement reads.

JJ said she wants to meet with the women to discuss what happened, but Thomspon, an attorney and the head of the York chapter of the NAACP, said she isn’t sure a meeting is the remedy.

The women say they were offered full refunds for their memberships, according to Fox 43, but said they aren’t leaving without an explanation.

“We were the only African American women on the course, and they wanted us off. There was no other reason,” Thompson said.