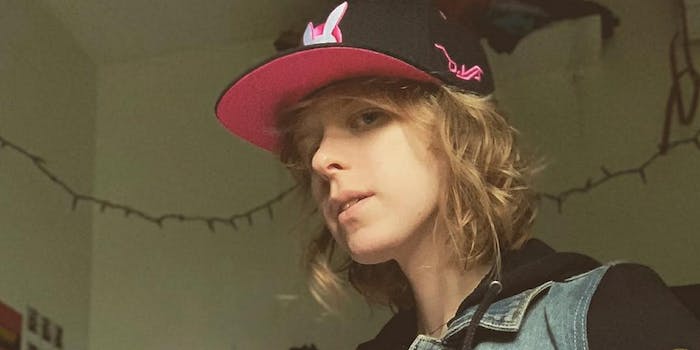 On National Coming Out Day, it’s difficult to know who to trust as a queer woman

Being yourself is harder than ever in the age of Kavanaugh and Trump.

Today is National Coming Out Day, and I can’t stop thinking about how I came out as a lesbian and transgender woman in 2015.

First, I told my dad. He didn’t really seem to take me seriously. That is, until the rest of my immediate family found me talking about my identity on the internet, and I was forced out of the closet in a series of conversations and arguments that went on endlessly thoroughout that fall. There was a lot of fighting, a lot of yelling, and a lot of crying. Thinking about it is still traumatic, and I mean that in the strongest sense of the word. I dream about it still. It hurts.

The worst of my coming out might be over, but three years later, I still “come out” to people all the time. Some coming-outs are fun, affirming, and safe, like telling another queer woman that I’m a lesbian. And then there are ones that are fundamentally dangerous, like outing myself as transgender at a bar late at night. These days, I often err on the side of caution: If I don’t have to admit I’m transgender or a lesbian in a given setting, I prefer not to.

I blame President Donald Trump for that.

Since the 2016 presidential election, the Republican Party has fostered radical, far-right bigots that eagerly follow Trump’s every word. Whether that’s mocking sexual assault survivors or banning transgender people from serving in the military, Trump can do no wrong with his fandom. In fact, his following loves the president’s outlandish behavior. To them, he’s just speaking from the gut, and isn’t that what being an American is all about? To hell with assault survivors or queer people. Treating them with respect will just fuel the so-called “left-wing mob.”

Their beliefs on LGBTQ rights haunt me. Gorsuch has been a staunch proponent of “religious freedom” laws, which give Christian Americans the right to deny services to queer and transgender people due to one’s religious beliefs. Kavanaugh, on the other hand, refuses to say whether Obergefell v. Hodges—the case that made gay marriage the law of the land—was correctly decided. He also wrote an opinion attacking the Affordable Care Act’s individual mandate, repeatedly ruled against worker discrimination cases, and defended religious freedom claims against the ACA, according to Lambda Legal.

For years, the highest court in the land felt like a stop gap that would prevent some of the worst judicial precedents imaginable for queer Americans. Now, I feel like the Supreme Court has the power to invalidate my rights across the U.S. All it takes is the right lawsuit, and I could lose health insurance coverage for hormone replacement therapy or gender-affirming surgeries. Not to mention, I can easily see Kavanaugh and Gorsuch setting precedents that create enormous religious freedom loopholes that invalidate antidiscrimination protections on a national scale. Kavanaugh’s confirmation is political incorrectness gone rampant, and it makes me worry about my future every single day.

Three years ago, I dealt with my first coming out, and while being rejected by my family hurt, I still felt like society was moving toward trans and queer acceptance at a breakneck pace. I wasn’t afraid to out myself in resumes and at parties when Obama was president. I’m not so confident these days.

We live in a different reality now. There are new rules. And it feels like the best way to survive is to come out strategically, lest you become a victim of someone who hates your very existence.

Alexandra Hoffman, a coordinator of core competence at the Yellowbrick psychiatric center in Illinois, stresses that coming out is an ongoing process. She also says it can be an emotionally draining one, too.

“It’s important for family and friends to consider that coming out isn’t a onetime event for many LGBTQIA folks,” Hoffman says. “Every new social circle, each new person you meet could potentially lead to a situation where you have to disclose, and it doesn’t necessarily get easier each time. This perpetual need to reveal oneself can be taxing and just isn’t present for heterosexual and cisgender individuals.”

These days, I would never out myself as a lesbian while making small talk at a gaming convention. I avoid going to coworking places and press events where I have to show my legal name and gender marker on my ID. Sometimes I even ask my girlfriend if we can avoid holding hands while we’re on vacation. I’ll still talk openly about my gender and sexuality at queer cafes and bookstores, but those spaces are an exception, and even in New York, they’re few and far between.

While we must be careful now for our safety, I still think there’s hope for the future. Especially if we band together and support each other. For starters, that means going to the polls and voting for candidates who have our best interests in heart. But it also means being there for our friends, family, and loved ones who are just coming out, especially queer children. We have a duty to help questioning people feel loved and affirmed as they come to terms with themselves, and building a compassionate and empathetic space for LGBTQ kids paves the way for a happier, stronger, and much more confident future queer generation.

“Families and loved ones supporting those coming out should first and foremost show the person unconditional love, even if they disagree or find it difficult to understand,” Yellowbrick’s post-doctoral fellow Dr. Logan Stohle told the Daily Dot. “It is important for parents to accept their child’s experience of coming out, as they might feel a range of emotions from excited, empowered, neutral, or concerned.”

When I came out, I didn’t necessarily have that unconditional love. Maybe that’s why coming out is so scary to this day. But even if Trump is in office, I’m trying my best to put the past aside by pushing forward and helping those still figuring themselves out. It’s hard to know who to trust, but at the very least, we queers can start with each other.