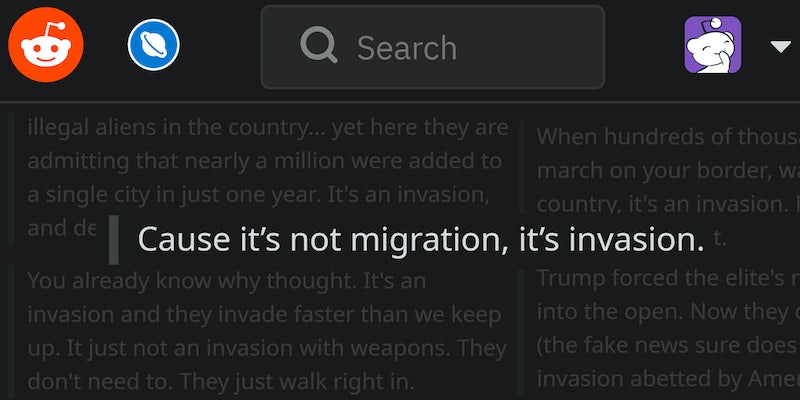 In the course of its few short years in existence, Reddit’s most infamous pro-Donald Trump home, r/The_Donald, has been accused repeatedly of racism, xenophobia, misogyny, and violent rhetoric.

It is currently under quarantine for making repeated calls to violence and threats against Oregon Democrats. Other users on the site have repeatedly demanded Reddit remove the site altogether for violating its terms of service.

And in the wake of a mass shooting in El Paso, Texas, by a gunman who railed against a “Hispanic invasion,” and tried to slaughter as many Mexican people as possible, the subreddit Against Hate Subreddits is flagging similar speech from r/The_Donald, where the group found over 50 claims of an “invasion” in just the two weeks prior to the shooting.

“i’m so sick of this asylum bullshit,” wrote one user. “WHAT FUCKING WAR ARE THEY FLEEING? WHAT VIRULENT OUTBREAK ARE THEY ESCAPING? none. it’s a goddamned invasion. they come from a shitty region and failed state to plant their terrible looking flags and endorse the same policies that will make the USA a failed state. die democrats!”

“This is an invasion. When you conquer an area, you put your countries flag on the highest area,” wrote another.

In his blog post, the mass shooter worried Mexican and Latin American immigrants would replace Americans and claimed he was defending his country.

Although the shooter said his views predated Trump, these comments on r/The_Donald show how the president has both enabled and amplified some of the more abhorrent viewpoints, thrusting them into the mainstream.

It’s the reason Reddit currently has r/The_Donald under quarantine, and it’s the reason other users of the site want it gone for good.