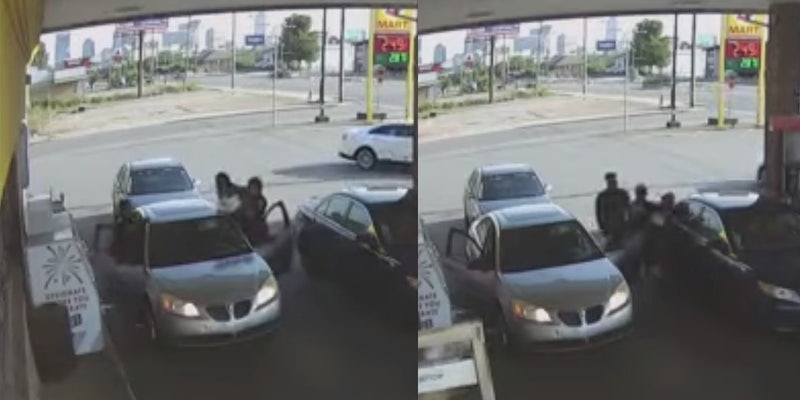 A Tennessee police officer who was shown on video slamming a Black woman against a car at a gas station has resigned, the Tennessean reports.

Barrett Teague, who was under investigation for the July 3 incident at a Z Mart in Nashville, Tennessee, resigned on Wednesday.

Security footage from the station shows the officer approaching Adreneyonia Ensley while she is still in her car. Ensley, 21, had reportedly posted on her Facebook that Teague parked behind her car because her license tag was expired.

In the video, which was reshared by the Tennessean, a man said to be Teague is seen approaching Ensley and having a conversation through her car window. There is no audio in the video.

After a few seconds of speaking, the officer goes back to his car, and Ensley is seen going back to check at the back of her car.

When she walks back to her car, Teague follows from behind and grabs her hands from behind. He then thrashes her against the open car door as she tries to free herself. As she seemingly tries to get back into her seat, he pushes her in and pulls her out, slamming her to the car parked next to hers.

The confrontation continues for some time as the person from her passenger seat is seen trying to speak to Teague. A few minutes later, Teague forcefully drags Ensley to the police car and holds her hands behind her back.

Following the incident, Teague was placed on desk duty while awaiting an administrative investigation, according to the Tennessean. His resignation terminates the department investigation, but the city of Nashville will continue a criminal investigation.