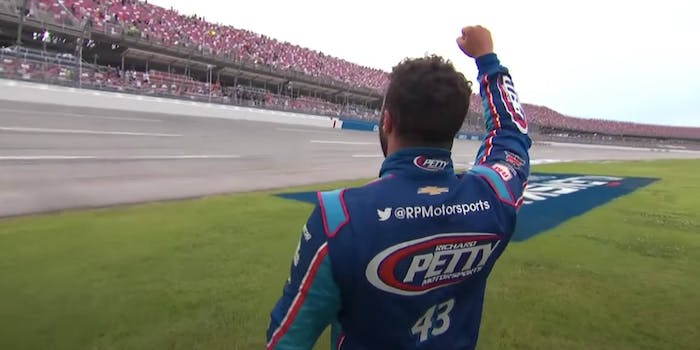 'None of the allegations of being a hoax will break me or tear me down.'

The FBI determined Tuesday that NASCAR driver Bubba Wallace was not the target of a hate crime—and far-right trolls are having a field day with the news.

NASCAR launched an investigation on Monday after a noose was discovered in the garage stall of Wallace, the organization’s only Black driver, at the Talladega Superspeedway in Lincoln, Alabama. The discovery comes less than two weeks after NASCAR banned the Confederate flag from being shown at its events.

The FBI has decided that Wallace “was not a target of a hate crime.” NASCAR shared the FBI’s findings in a statement.

“The FBI report concludes, and photographic evidence confirms, that the garage door pull rope fashioned like a noose had been positioned there since as early as last fall,” NASCAR wrote. “This was obviously well before the 43 team’s arrival and garage assignment. We appreciate the FBI’s quick and thorough investigation and are thankful to learn that this was not an intentional, racist act against Bubba.”

Wallace shared his thoughts on the investigation in a Tuesday interview with CNN’s Don Lemon. Despite the FBI’s conclusion, Wallace insisted that the rope found in his garage stall was a noose.

Upon the discovery of the noose in his garage, Wallace faced backlash from far-right trolls who believed he fabricated the incident and compared him to disgraced Empire star Jussie Smollett. Those trolls doubled down on their criticisms in the wake of the FBI’s conclusion, calling the noose controversy a “hoax.”

“Just like the Jussie Smollett story, the Bubba Wallace noose story was another media hoax,” Turning Point USA founder Charlie Kirk tweeted. “When will we learn that we can’t trust the mainstream media in times like these?”

Liz Wheeler, host of The Tipping Point on far-right cable channel and conspiracy network One America News Network, demanded that Atlantic contributor Jemele Hill walk back her recent statement that the noose in Wallace’s garage was a “disgusting reminder of who this sport [NASCAR] is for.”

Hill wasn’t having it, though.

“It. Was. A. Noose,” Hill responded to Wheeler. “They just don’t believe it was directed at Bubba Wallace. I know facts nor context is your strong suit, but do try to keep up.”

Wallace, meanwhile, refuses to let the FBI’s decision or far-right internet trolls get the best of him.

“This will not break me,” he told Lemon. “None of the allegations of being a hoax will break me or tear me down. Will it piss me off? Absolutely. But that only fuels the competitive drive in me to shut everybody up.”