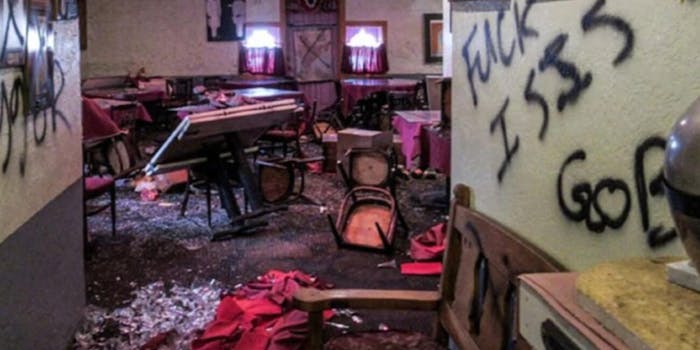 Police are calling it a hate crime.

A Sikh-owned restaurant in Santa Fe, New Mexico, was vandalized and damaged over the weekend in what police are calling a hate crime, according to the Santa Fe Reporter.

Bajit Singh, the owner of India Palace, told the Reporter he found the restaurant trashed and spray-painted with anti-Black and xenophobic messages on Monday afternoon.

Hateful messages such as “White Power,” “Go Back,” and the N-word, among other slurs, were spray-painted on doors and walls, according to photos shared on social media. “Trump 2020” was also spray-painted in the restaurant.

Cameron Brown, identified by the Reporter as an India Palace assistant, shared photos and videos of the vandalized restaurant on Facebook Monday. “Some broke into my best friend restaurant and destroyed it. Fuck you and fuck your parents,” Brown wrote.

Photos of the kitchen show broken plates, and other dishes and utensils are strewn across the floor, with seemingly no space to walk around. Glasses are broken, and chairs are thrown across the India Palace floor. According to the Reporter, one of India Palace’s statues of a goddess was also desecrated.

Brown told the Reporter that India Palace suffered an estimated loss of $100,000. That includes care package supplies Brown and Singh had for a local homeless community.

It has yet to be confirmed who is behind the attack. However, last Thursday, an armed man reportedly parked in an India Palace parking spot, and when he was asked to move, he threatened an attack.

The Daily Dot reached out to India Palace.

“This hate crime at India Palace is sickening and appalling. We need to stand up as a community and denounce this despicable act. We will find whoever did it and punish them to the full extent of the law.
We absolutely reject racism, intolerance, and hate. #SantaFeStrong,” Webber wrote on Twitter.

Police have also classified the incident as a hate crime, the Reporter revealed on Tuesday.

According to the Reporter, numerous fundraisers were started for the restaurant.

A GoFundMe called “Support India Palace” and organized by Paper Dosa raised almost $57,000 but has since been deactivated.

Update 3:11pm CT, June 24: On Wednesday, Anne-Lisa, who is affiliated with the Paper Dosa fundraiser, told the Daily Dot the campaign had to be put on “pause” because of how quickly it became a success.

“[The] Singh family is very grateful for the $50,000 we raised. We are hoping that the Singh family will set up another GoFundMe account,” she said.

Another fundraiser, which has Brown’s name as one of the organizers, was created early morning on Tuesday and has since raised $26,000.