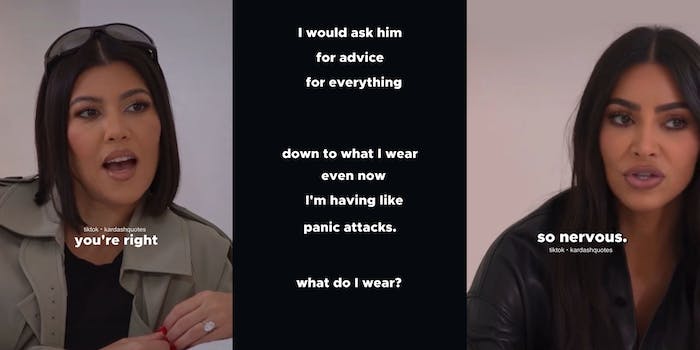 What is narcissistic abuse? A Kanye clip from ‘The Kardashians’ sparks TikTok debate

'This form of abuse can be concealed as something else.'

A clip from the Kardashian’s new Hulu reality show has sparked a conversation on TikTok on narcissistic abuse.

The clip, originally posted by Kardashian family fan account @KardashQuotes, features a 37-second excerpt from the most recent episode where Kim and Kourtney speak on Kim’s mental health after his split with her husband, rapper and producer Kanye West.

In the short clip, Kim says, “I got to a point where I was, just like, I would ask him for advice for everything down to what I wear. Even now, I’m having like, panic attacks, like what do I wear? You know, and finally, like in New York, I will say like he styled me all for SNL, for the Wall Street Journal magazine, I won the innovator award for Skims, and I was like how do I wear something that hasn’t been pre-vetted.”

Kourtney responds, asking if this made her nervous that she’d wear “a bad outfit,” and Kim confirmed.

She continued detailing the events that followed, “Oh, and then [Kanye] called me [after the WSJ Innovator awards], and he told me that my career is over, and then he showed me a picture of Marge Simpson wearing something similar.” Kardashian wore a fashionable brown leather dress, designed in collaboration between Skims and Fendi, to the event.

The clip was stitched by @thecosmiclaundry on TikTok, a collective of astrologers that reportedly seek to help women “in their healing,” who claim that this behavior is an indicator of narcissistic abuse.

While the astrologer’s suggestion that this may be related to Kim’s birth chart should be taken with a grain of salt, the suggestion that this could be an example of narcissistic abuse holds weight. This isn’t the first time West has been accused of being abusive by fans, people in Hollywood, or even the National Coalition Against Domestic Violence.

Azaelia Banks, a controversial rapper known for calling people out, shared her thoughts on West on Instagram in February, saying “Y’all are making way too many excuses for Kanye. Stop trying to help him and start trying to help the poor child that he keeps on trying to embarrass and abuse publicly to garner sympathy for his ashy ass.”

In a now-deleted Instagram post, West said, “I  told y’all before about this tik tok stuff. Now my 8 year old on here singing she fell in love with an emo girl Leftist don’t want fathers to have no say in our childrens lives.” He followed up the post with a video telling Kardashian to “stop antagonizing him.”

Social media users were concerned with the way that West went about the situation, claiming he was “deeply abusive.” These observational claims remain speculative and unverified, but the question remains.

What is narcissistic abuse?

Kanye West has not been formally diagnosed with narcissistic abuse. But to understand the viral conversation, the Daily Dot spoke to Dr. Jordan Schaul of Scapegoat Strength on what narcissistic abuse is, how it can manifest in our relationships, and how it differs from other forms of abuse.

Dr. Schaul defines narcissistic abuse as “A form of emotional abuse perpetrated typically by individuals with Narcissistic Personality Disorder and other traits and adaptations associated with the Dark Tetrad personalities. Hence, sociopaths also perpetuate this kind of emotional abuse to serve their own needs.”

Narcissistic abuse is instigated by narcissists with the intention of controlling their victims. According to the mental health website Choosing Therapy, it often manifests in a cycle of idealization, devaluation, and rejection.

He continues, noting that narcissistic abuse isn’t always easy to recognize. “This form of abuse can be concealed as something else. It is not always recognizable as harmful or blatant, which makes it all the more dangerous. When recognized by the victim, it is often described as control and manipulation that presents as a subtle and nuanced form of devaluation that is demeaning and even dehumanizing. It is not always obvious to third parties including inexperienced therapists and coaches.”

The idealization stage, which is also called the honeymoon stage, can include love-bombing, promises of marriage, gifts, dates, and outward affection toward the victim by the abusive partner.

The honeymoon stage is followed by the devaluation stage, where the narcissistic abuser may engage in behaviors like gaslighting, verbal abuse, manipulation, and threats of harm toward themselves and others. Dr. Schaul notes “This manipulation, known as gaslighting is generally perceived as a way for abusive individuals to obtain narcissistic supply to satiate their needs for attention and adulation.”

Dr. Schaul continues, “When a perpetrator alternates between devaluing and idealizing another person, the behavior may be confusing to the victim and others. Furthermore, this kind of behavior may raise skepticism by third parties and elicit reactive abuse by the victim. Those who perpetrate narcissistic abuse, whether they present with clinical or subclinical manifestations associated with Dark Tetrad personalities, can be very charming and alluring.”

Narcissistic abusers can then escalate to the rejection stage, where the abuser blames the victim for the relationship ending and proceeds to find a new partner, or return to the honeymoon stage repeatedly, restarting the cycle of abuse. Choosing Therapy notes that surviving narcissistic abuse can cause victims to experience shame, guilt, depression, anxiety, and even PTSD.

There are resources available for victims and survivors of narcissistic abuse, including the Domestic Violence Hotline and the National Dating Abuse Helpline.