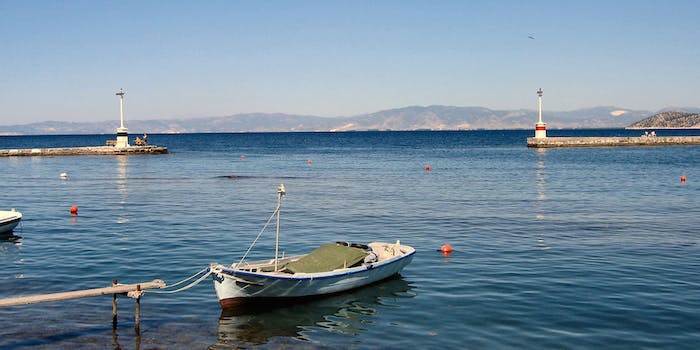 Egyptian billionaire Naguib Sawiris proposed a solution this week to the burgeoning refugee crisis facing Europe, but is the telecom tycoon just pulling our leg?

Sawiris, the chief executive of Orascom TMT and one of Egypt’s richest citizens, has suggested hosting the tired masses of refugees surging into Europe on a Mediterranean island where they could begin life anew and construct their own nation from scratch.

Sawiris’ plan, however, isn’t simply to exile the asylum-seekers on some remote, deserted island. Those fleeing the conflict zones of Africa and the Middle East should be provided with life’s essentials—food, water, and shelter—and, just as crucial, employment.

Greece or Italy sell me an island,ill call its independence and host the migrants and provide jobs for them building their new country

In a recent television interview, Sawiris said that he intended to approach the governments of Greece and Italy about purchasing an island where he could construct temporary shelters. Then, he said, “you start employing the people to build housing, schools, universities, hospitals.”

“And if things improve, whoever wants to go back [to their homeland] goes back,” Sawiris said. What’s most important is that the refugees be treated like “human beings,” he added. As it stands, “they are being treated like cattle.”

But some critics, who’ve labelled Sawiris “Egypt’s Donald Trump,” have pointed to the billionaire’s affinity for publicity in doubting his motives. In the midst of economic turmoil, Greece has placed dozens of islands up for sale—if Sawiris truly wanted one today, there are plenty to choose from.

Fleeing oppression and war, hundreds of thousands of refugees have braved the sea to arrive on European shores. Thousands more have died in what has become known as Europe’s Mediterranean “moat.” In April, for example, a vessel bound for Italy from Libya capsized in the night, and up to 700 people drowned. Those who do survive the journey are often greeted by additional misery and starvation, cooped behind razor wire fences in filthy migrant camps.

“If Europe does not return to the path of common sense, it will find itself laid low in a battle for its fate.”

More than 626,000 asylum applicants registered in the European Union last year, a 44 percent increase from the just over 435,000 who applied in 2013. Syrians made up the largest group with 122,790, or 20 percent, of the applications; more than 220,000 of Syria’s citizens had been killed in the civil war by January 2015, according to United Nations estimates.

In a statement Friday, António Guterres, the U.N.’s high commissioner for refugees, said that those fleeing conflict zones in places such as Iraq, Syria, and Afghanistan, who are found to have a valid protection claim, must “benefit from a mass relocation program, with the mandatory participation of all E.U. member states.”

“This can only work if it goes hand in hand with adequate reception capacities, especially in Greece,” Guterres warned. “Solidarity cannot be the responsibility of only a few E.U. member states.”

Hungary’s Prime Minister, Viktor Orbán, however, was concerned this week about the “explosive consequences” to Europe’s Christian identity due to the influx of Muslim refugee migrants. “There is no alternative,” he said, “and we have no option but to defend our borders.”

“Irresponsibility is the mark of every European politician who holds out the promise of a better life to immigrants and encourages them to leave everything behind and risk their lives in setting out for Europe,” Orbán added. “If Europe does not return to the path of common sense, it will find itself laid low in a battle for its fate.”

Thousands more have died in what has become known as Europe’s Mediterranean “moat.”

Sawiris, a member of the Coptic Orthodox Church, has conceded that his plans to construct a new island nation for Europe’s migrant and refugee population is a “crazy idea” fraught with immense challenges. He’s casually tossed around a figure of $100 million, which he says would only afford him the island itself. The real cost, he says, would be the “investment in infrastructure.”

By mid-2014, Turkey housed nearly a quarter million refugees in its southern provinces bordering Syria. In camps, such those in Yayladagi and Altinozu, tens of thousands lived in makeshift cities, and more than a half million lived outside the camps, according to the U.N., including 152,000 Syrians who were in the country illegally. The cost of maintaining shelters, providing food, water, and sanitation, not to mention school and clinics, had risen to as much as $4 billion by June 2014.

Crazy idea .. Maybe but at least temporary until they can return to their countries ??!!

Poised for an influx of as many as 800,000 refugees this year, German authorities are contemplating plans to turn Berlin’s Tempelhof Airport—known less-charmingly as “Hitler’s Airport”—into a refugee camp, which they suggest could be renovated to house as many as 4,000 people.