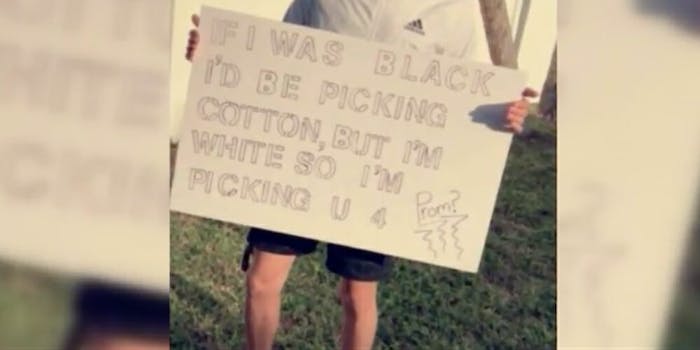 'There is absolutely nothing humorous about slavery.'

A white Texas high schooler used a racist sign to ask his prospective date to prom on Snapchat, according to multiple reports.

“If I was black I’d be picking cotton, but I’m white so I’m picking U 4 Prom,” the unidentified teen wrote on a sign. The student, who goes to Vandegrift High School in Leander, Texas, sent a snap of himself holding up the sign.

KVUE reports that Charlie Little, the school’s principal, sent a letter to the Vandegrift High School community addressing the issue. Little said it was other students who brought the post to his attention, and the school “immediately” opened an investigation into the matter.

“In the case of social media, we have a process to investigate, assess and respond to social media posts that may disrupt the school environment,” Little wrote in the letter. “We do not tolerate or permit discrimination or hate speech of any kind at Vandegrift.”

According to the letter, the preliminary investigation completed showed that “the student intended the posting to be a humorous reenactment of a 2018 meme that garnered national attention.”

In 2018, a Florida high schooler sent out a Snapchat with the same exact content written on a sign.

Little wrote that while this is “inappropriate and disturbing,” the student’s intent was not to “harass, bully, or discriminate” against any particular individual and asked for the respective student’s privacy. Little added that anybody who felt discriminated against because of this incident should come forward to the proper school authorities.

According to the letter, the school will appropriately discipline the student within the limitations of the school’s code of conduct.

“There is absolutely nothing humorous about slavery, and its use in this context goes against the values and ethical principles we teach,” Little wrote.