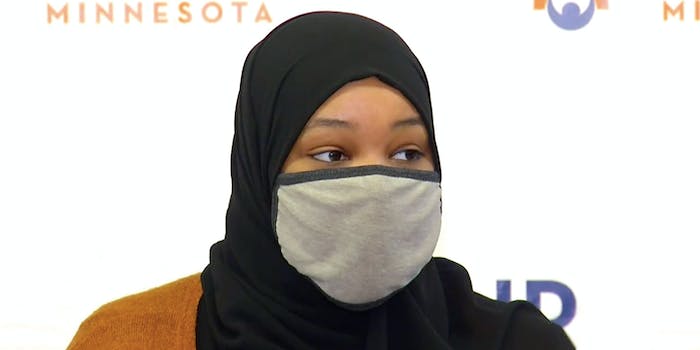 The teen filed a complaint with the Minnesota Department of Human Rights.

A Muslim teenager filed a human rights complaint after a Starbucks in Minnesota served her a cup with “ISIS” written on it, BuzzFeed News reports.

The teen, Aishah (who requested Buzzfeed not use her last name out of safety concerns), said she went to a Starbucks inside a Target in St. Paul on July 1. The barista allegedly asked her to repeat her name while taking her order. Yet when Aishah received her drink, she saw “ISIS” written on the cup.

Aishah told Buzzfeed she believes the barista discriminated against her because she was wearing a hijab and face mask. When pressed about the incident, the Starbucks supervisor said the employee misheard Aishah’s name, KSTP reports. Target reportedly offered her a new drink and $25 gift card.

The Minnesota chapter of the Council on American-Islamic Relations (CAIR-MN) held a press conference on Monday calling for the firing of the Starbucks employee.

“This is a reminder that Islamophobia is alive and present in our communities,” said Mohamed Ibrahim, deputy director of CAIR-MN. The organization also helped Aishah file a complaint with the Minnesota Department of Human Rights.

Aishah delivered an account of her experience at Monday’s press conference as well.

“The word that was written on the drink is a word that shatters the Muslim reputation all around the world,” she said. “I felt humiliated, I felt enraged, I felt belittled. Starbucks and Target have had other similar incidents and yet no change. This has happened to me, and I fear that this will continue to happen to other Muslims because Starbucks and Target do not value Muslims.”

On Monday, Target responded to the incident in a statement to KSTP.

“At Target, we want everyone who shops with us to feel welcomed, valued and respected and we strictly prohibit discrimination and harassment in any form,” the company said. “We have investigated the matter and believe that it was not a deliberate act but an unfortunate mistake that could have been avoided with a simple clarification. We’re taking appropriate actions with the team member, including additional training, to ensure this does not occur again.”