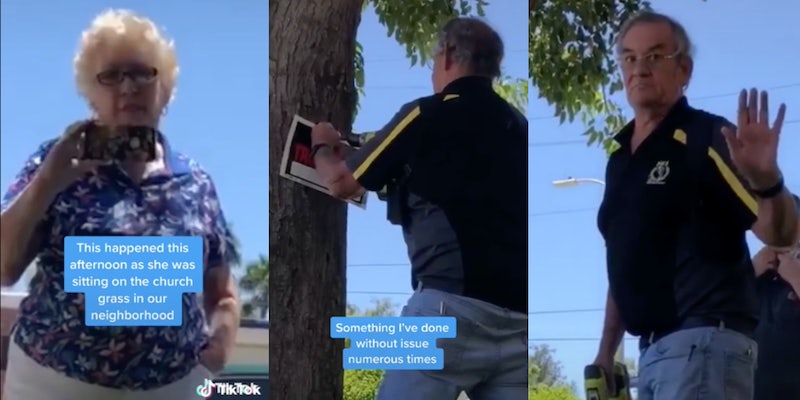 In the video, the church members admit the sign is just for her, scream out 'white lives matter,' and threaten to call the police.

A TikTok video of a Black woman being confronted for peacefully sitting on the front lawn of a church while studying is circulating online.

On Tuesday, stunt woman and voice actor Alex Marshall-Brown recorded a disturbing interaction between herself and church members outside St. Paul’s First Lutheran in North Hollywood.

The clip starts with two white men putting up a “No Trespassing” sign on a tree. Brown is heard inquiring whether the sign was because of her, and they confirmed that it indeed was just for her. As Brown questions their “un-Christian” actions, the churchgoers continue attempting to boot her without any just reason.

The uncomfortable and already racist situation is worsened when one of the men tosses an “all lives matter” comment at Brown and threatens to call the police.

A white woman then entires the frame, and in full “Karen” mode, tells Brown she is “threatening their lives” for simply sitting on church property.

The video concludes with the “Karen” walking away and a close-up of the newly erected “No Trespassing Sign.”

Although the church members did threaten to call the police several times in the video, TMZ reports that the Los Angeles Police Department was not notified.

As the video circulates online, viewers are expressing their shock and dismay. Many agreed that the church members’ actions were indeed “racist” and “un-Christian.”

Since then, senior parishioners have weighed in on the matter, admonishing the actions of the church-booting members.

In a Facebook post, Santiago Botero, the acting principal at a St. Paul’s-affiliated school issued a statement. Botero calls the people in question “volunteers” and confirms that they have stepped down from their positions. Botero describes the video as “personally offensive” and apologizes to Brown on behalf of the St. Paul’s community.

“I am personally offended by what I saw in the video and would like to apologize on behalf of St. Paul’s First. I will try to contact Alex and she would ever like to speak to me personally about what she experienced at St. Paul’s First, I would invite the opportunity to meet with her,” he states.