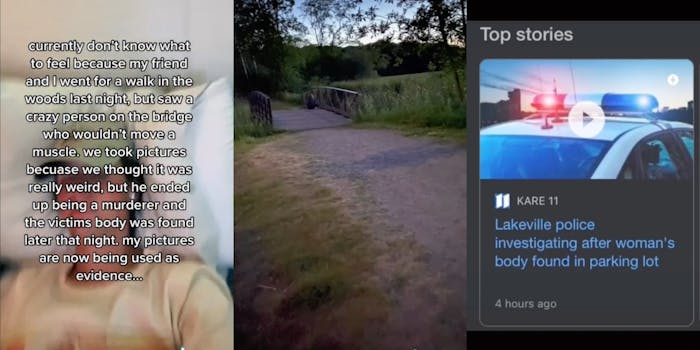 Some commenters felt that the video was fake.

TikTok user Zachahry posted a video saying he’s involved with a murder investigation, but some folks are skeptical of his claim.

In a viral TikTok, he explained that he went for a walk with his friend and had a strange encounter with a man, apparently in Lakeville, Minnesota. The video has amassed over one million views and 290,000 likes.

“Easily the scariest night of my life,” Zachahry said in the comments.

Zachahry claims he saw a “crazy person” on a bridge who wouldn’t move a muscle. He and his friend took pictures of the person because they thought it was weird. Now, he’s saying those pictures are being used as evidence.

“He ended up being a murderer and the victim’s body was found later that night,” Zacharhy alleges.

He then showed the picture he captured, zoomed in several times, of a man sitting on a bridge. The man is slightly hard to make out and his back is facing the camera.

Viewers couldn’t get over Zachahry stopping for pictures.

“WHY DID YOU GO UP TO HIM,” one asked. Another said, “Of course Gen Z approaches a serial killer.”

Although it’s unclear whether the man in the photo is actually the suspected murderer, there was a woman found dead in the area early the next morning.

According to a Lakeview Police Department press release, officers found a 32-year-old man with self-inflicted gun wounds and took him into custody. Shortly later, they found a dead woman with several gunshot wounds in a parking lot.

After the man’s release from the hospital, he was arrested for second-degree murder.

The press release did not mention Zachahry’s alleged evidence, but he shared a screenshot of a local news report about the case in his video, implying that his photos were related to this investigation. However, some commenters felt that the video was fake.

“Literally read articles from reliable sources and nothing about this was said,” one person commented.

One person questioned the location discrepancy, as the video shows pictures at a park and the woman’s body was found in a parking lot.

“The body wasn’t found in [the park], the guy was just there after,” Zachahry responded.

Others pointed out physical differences between the man in Zachahry’s photos and the man arrested for the murder he mentioned in the video, saying they look nothing alike.

Zachahry did not respond to the Daily Dot’s request for comment by the time of publication.