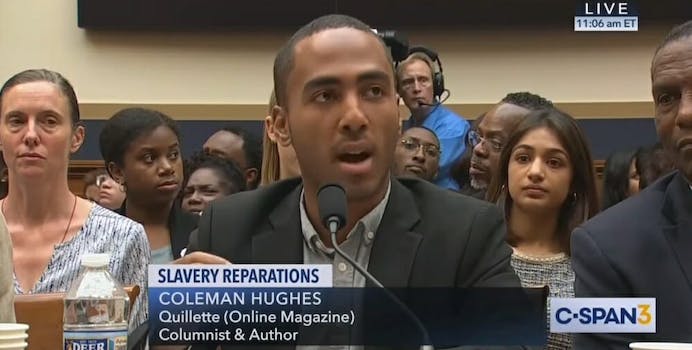 While many of the speakers at Wednesday’s congressional hearing on slavery reparations delivered impassioned arguments, 23-year-old Quillette writer Coleman Hughes riled up the audience so much that the chair of the hearing told people to “chill” several times.

Online critics were similarly aghast as Hughes, who is Black, called reparations a “moral and political mistake.” The biggest surprise so far, though? He has a SoundCloud, just like seemingly every other viral star.

IS A SOUNDCLOUD RAPPER

The House Judiciary subcommittee on the Constitution, Civil Rights, and Civil Liberties met earlier this week to discuss House Resolution 40, which would dedicate a commission to study and propose possible reparations for slavery’s impact. Activists like Ta-Nehisi Coates, actor Danny Glover, and Sen. Cory Booker (D-N.J.) argued in favor of the measure. But it was Hughes’ testimony for the minority that drew audible booing from the audience.

“Reparations, by definition, are only given to victims,” Hughes argued. “So the moment you give me reparations, you’ve made me into a victim without my consent. Not just that: You’ve made one-third of black Americans—who consistently poll against reparations—into victims without their consent, and Black Americans have fought too long for the right to define themselves to be spoken for in such a condescending manner.”

Black Americans alive during the Jim Crow era should receive reparations, Hughes said, but otherwise the country should pool its resources into addressing current issues within the Black community. “Black people don’t need another apology,” he insisted. “We need safer neighborhoods and better schools. We need a less punitive criminal justice system. We need affordable health care. And none of these things can be achieved through reparations for slavery.”

Like the hearing’s live audience, critics online weren’t on board with Hughes’ argument, with many questioning the undergraduate student’s level of expertise on the subject. Things took a surreal and hilarious turn when cultural commentator Franklin Leonard shared a link to Hughes’ SoundCloud on Twitter. Under the moniker Coldman, Hughes has released albums including “My Dick Works Fine!” and “i am a pussy.” One track is simply called “I Can’t Fart Around You.” Hughes did not respond to the Daily Dot’s request for comment, but he did confirm in a tweet that the SoundCloud account and the raps are his.

For those of you googling (sorry, "unearthing") my publicly-available rap music, I'll make it easier. My personal favs are "Hey," "Fake," & "New Sneakers," but they're all gold imho. Enjoy! https://t.co/2VrVZwc7dw

“Honestly, if @coldxman had ended his Congressional testimony like a viral tweet with ‘check out my Sound[C]loud,’ I probably would have forgiven him for everything,” Leonard tweeted.

Now I can't stop thinking about Mitch McConnell dancing around his Senate office to a song called My Dick Works Fine. Thanks A LOT @coldxman. pic.twitter.com/K90wNmCR4v

Who knows? Hughes’ testimony could secretly be the most elaborate scheme a SoundCloud rapper has ever orchestrated to try to blow up. It certainly seems to be working.