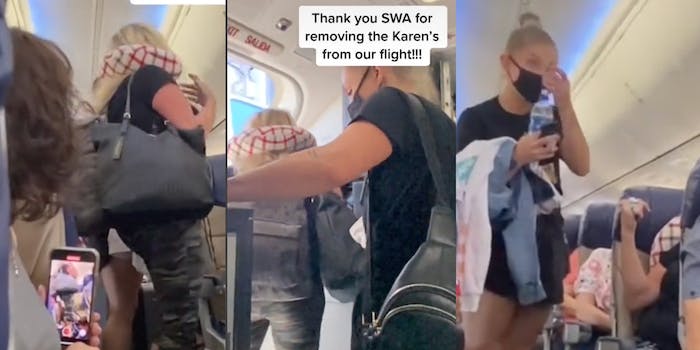 Video: Mother-daughter Karen duo delays Southwest flight after demanding other passengers give up their seats

The Karens 'made an announcement' asking passengers to give up their aisle seats.

A mother and daughter Karen duo were kicked off a Southwest flight from Sacramento, California to San Diego, California in mid-July after allegedly yelling at other passengers and threatening to grab onto people during the flight.

In a viral TikTok posted by @official_norcal_mom that has garnered over 498,000 views, the two women can be seen in the aisle of the still-grounded plane. In the text overlay of the video, @official_norcal_mom wrote that the flight had already been delayed two hours and that the women had boarded right before the plane doors closed. Southwest has an open seating system, meaning it’s first-come, first-served, so most of the seats were already filled. The Karens wanted aisle seats, so the daughter tried to “make an announcement” to the whole plane asking other passengers to move seats. One flight attendant told her she couldn’t do that.

“We have families,” the flight attendant said to the younger Karen. “We have little kids. We can’t have people yelling.”

The younger Karen responded by saying she wasn’t yelling. Someone, presumably another attendant, stated the crew would call a supervisor to handle the situation. The younger Karen then said she and her mother would sit down, sarcastically adding that her mother “can just cry and scream on the plane.”

“She’s gonna grab onto you and scream and cry,” the younger Karen said of her companion.

“Okay ma’am, if you’re going to say things like that, we’re going to have to put you on a different jet,” a second flight attendant responded. The older Karen said she wouldn’t.

The pair was then asked to move back into the jetway, according to another overlay caption written by @official_norcal_mom. In the video, the younger Karen can be seen explaining the situation to her mother. The TikTok user added that the flight attendants felt the other passengers would not be safe with the Karens onboard, so they were removed from the flight.

“They will likely not be allowed to fly on [Southwest] again,” @official_norcal_mom wrote.

The TikToker added that the flight was delayed an additional hour because of the Karens. She said that the rest of the plane applauded when the two left the plane.

“Thanks Southwest for doing the right thing and getting them off the plane,” @official_norcal_mom said in a follow-up video.

The Daily Dot reached out to Southwest for comment.