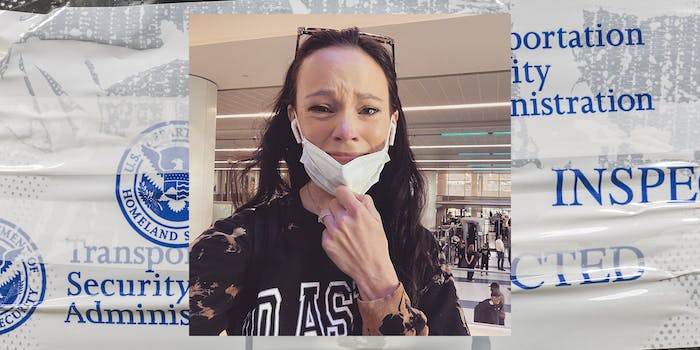 ‘We all just cry in the bathroom, dry our tears and move on’: Mom says TSA wouldn’t allow ice packs for breast milk through security

Agents forced her to check the ice packs because they weren't 'frozen solid.'

A mother says that airport security agents forced her to check ice packs for breast milk that she planned to carry on a flight so she could pump before flying.

In a Twitter thread, she says that she was traveling for the first time since having a baby 10 weeks ago and brought two ice packs. She says she didn’t have any breast milk while going through security checks but had planned to pump before flying. Calandrelli noted that it is important for people who are breastfeeding to pump when they have milk to avoid mastitis, which is an infection caused by clogged milk ducts.

Calandrelli says that three male Transportation Security Administration agents said she couldn’t bring the ice packs on the flight because they were not “frozen solid.” She says that when she asked to speak with a female TSA agent, her request was denied.

“They escorted me out of line and forced me to check my cold packs,” Calandrelli tweeted. “Meaning I couldn’t pump before my flight for fear it would spoil.”

In her tweets, Calandrelli references TSA’s policy on gel ice packs on their website, which states that “medically necessary gel ice packs in reasonable quantities are allowed regardless of their physical state of matter (e.g., melted or slushy).” TSA states that final decisions about whether gel ice packs are “allowed through the check point” should be made by individual TSA officers and that gel ice packs that aren’t totally frozen may be subject to additional screening.

“Emptying my breasts on a regular schedule and providing food for my child IS medically necessary,” Calandrelli tweeted.

Calandrelli called her interaction with TSA humiliating, embarrassing, and infuriating.

“There’s so much pressure to breastfeed, but @TSA makes it impossible,” Calandrelli tweeted. “It’s yet another system in place that makes it harder for women to get back to work after they’ve started a family.”

Yesterday I took down my posts about how @TSA treated me at @flyLAXairport. I was embarrassed at how emotional I was. I was anxious about the confrontation. So I deleted it.

But they make too many mothers feel this way, so I’m going to talk about it bc this needs to stop 🧵 pic.twitter.com/MIZchi8M6k

Shortly after sharing her experience with TSA, Calandrelli tweeted that other women had messaged her saying they had had similar stories about being at the airport while breastfeeding.

“We all just cry in the bathroom, dry our tears and move on,” Calandrelli wrote. She says that she wants a response from TSA.

In a statement to the Daily Dot, a TSA spokeswoman said that TSA will “look into all circumstances involving this situation and address it appropriately.”

“We take all traveler concerns about our security checkpoint screening processes seriously and are committed to ensuring that every traveler is treated with respectfully and courteously,” the spokeswoman told the Daily Dot.

The spokeswoman said freezer packs of any kind are only allowed to be carried on if they are frozen solid. Partially frozen or not frozen packs have to meet 3-1-1 requirements for carrying on liquid (3.4 oz or small containers of liquid are permitted).

Many Twitter users in the replies to Calandrelli’s thread sided with her and shared their experiences with TSA and children.

“When I was pregnant with my first, the TSA agents contradicted their own website about which scanner it was safe for me to go through while pregnant,” @stephonee tweeted. “And then treated me like an idiot for having asked and being worried.”

“I drove everywhere when I was nursing because I was worried about not being able to take things through security. Worried about my privacy being invaded,” @ours_keep replied. “Seems like my fears weren’t unfounded.”

“Once when I was pregnant I went through a TSA security line – with TSA pre-check and Global Entry – at the @AUStinAirport, and an agent asked me what was under my shirt,” @monicamaytweet tweeted. She said she informed the agent that there was a baby under her shirt, as she was pregnant.

Calandrelli has continued to tweet about her experience with TSA and referenced the leaked draft of the Supreme Court’s possible decision to overturn Roe v. Wade as further proof that people who can get pregnant are unable to work while having children.

“Experiencing this in the context of the recent SCOTUS news, in a country that STILL does not have federally mandated paid leave,” Calandrelli tweeted. “We’re treated like our only value in this country is creating a baby.”