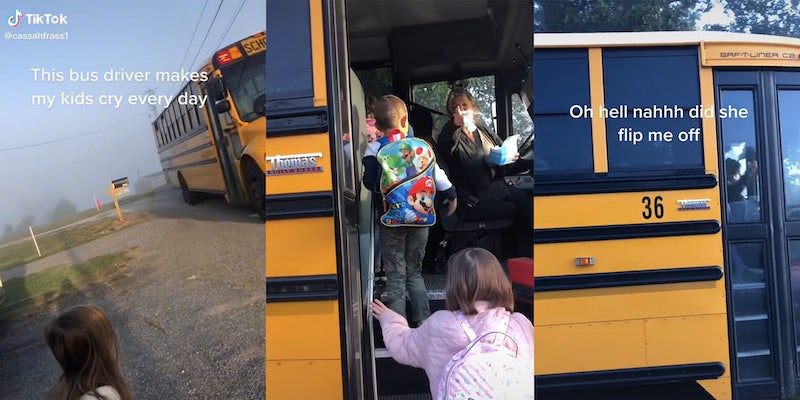 The bus driver yells at the mother in response.

A viral TikTok video shows a mom confronting a bus driver who allegedly makes her kids cry every day. In the video, she gets yelled at by the bus driver herself.

TikToker @cassahfrass1, who seems to go by Cassah and is based in Tennessee, filmed and posted the video to TikTok on Tuesday, with the caption: “The school can’t do anything, they come home crying every day.”

As the bus lands at the pickup spot, the overlay text reads: “This bus driver makes my kids cry every day.”

She tells her kids she loves them as they board the school bus. Then, she tells the Washington County school bus driver, who is handing face masks to the children, “Please don’t yell at my kids today.”

The driver says “I don’t yell at your kids” in response.

“No, I do not; you shut your mouth,” she then tells the concerned parent, pointing at her.

“Who do you think you are?” the mom asks.

“Who do you think you are?” the driver volleys right back to her.

“I’m asking you not to yell at my kids,” the mom says.

“How dare you tell me not to yell at your kids,” the bus driver says.

The mom tells her that her children “cry every day.”

The bus driver then drives off, but not before seemingly flipping the mom off on her way out.

Many viewers speculated that the driver does yell at the children considering how she spoke to the mother.

Many suggested she “call the school board or school bus department. They will do something about it. Poor babies.”

And many others wondered why the mother did not take the children to school herself (not a luxury everyone has), versus subjecting them to the bus driver’s alleged abuse.

Cassah posted a response on Wednesday, in which she alleged a litany of offenses by the driver. She says the driver told her daughter that her mom is an “a**hole” and pushed one of her children around on the bus. She says she “should’ve yanked them off the bus.” However, she says she was asked by the management of the bus drivers to have her kids continue to ride the bus so that they could “monitor” the driver’s actions.

The Daily Dot has reached out to Washington County Schools for comment.