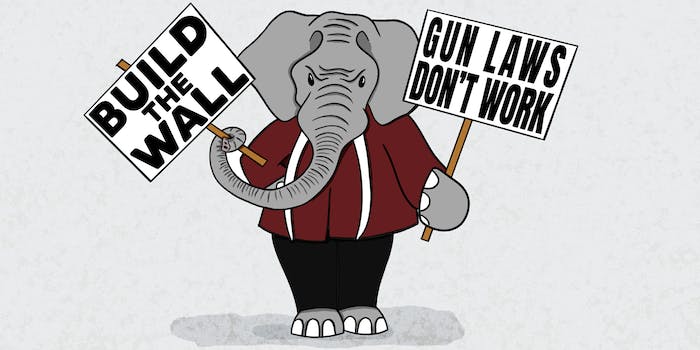 To conservatives, one murder matters more than every mass shooting.

President Donald Trump and his fellow Republicans have proven once again that their response to a tragic event will always be commensurate with the political points they can score from it.

In particular, the current strain of Republicans treat crimes very differently depending on who and how it was committed. It’s not hard to find examples of this disparity throughout recent history, but the events of the last week have made the contrast particularly sharp.

By looking at the conservative responses to the murder of Iowa college student Mollie Tibbetts by an undocumented immigrant and the mass shooting that occurred at a video game tournament in Jacksonville, Florida, you can see the selective focus of the GOP on full display. Once again, the president has seized on an opportunity to demonize immigrants while ignoring gun violence and domestic terrorism.

One death was seized on by GOP politicians as justification flurry of policy proposals around immigration. The other deaths, caused by yet another mass shootings, were met by a collective shrug: the standard reaction from Republicans when it comes to gun violence.

Last Tuesday, Tibbetts’ body was recovered by law enforcement officials in Iowa following a weeks-long search. Christhian Rivera, a 24-year-old undocumented migrant farm worker, led the police to the body and is considered the prime suspect in the case.

As soon as the news broke, Republicans from the president on down jumped at the opportunity to publicize Tibbetts’ death and demand changes to current law.

“A person came in from Mexico illegally and killed her,” President Trump said in a video released on Twitter after Tibbetts body was recovered. The official White House Twitter account posted a video demonizing immigrants on Wednesday, one day after Tibbetts’ body was found.

At a rally in West Virginia Tuesday night, President Trump echoed his online musings, saying, “You heard about today with the illegal alien coming in very sadly from Mexico. And you saw what happened to that incredible beautiful young woman. Should have never happened. Illegally in our country.”

Lobbyists and media personalities on the right lined up to highlight Tibbetts’ death as an example of why the president’s outlook on the border is correct. “She was killed by a person who is exactly what Trump has been warning about,” Newt Gingrich told on Fox News. Gingrich was one of a number of guests to talk about Tibbetts’ death on Fox News.

Mollie Tibbits was killed by an illegal immigrant. There will be ZERO outrage from Democrats and the spineless celebrities who march to their orders because they need open borders for votes.

How many more AMERICAN lives is the left willing to sacrifice for elections?

Those facts and studies are irrelevant as far as the president and his supporters are concerned.

If you need proof that the president and his party care more about scoring points that confronting tragic crimes, you only need to look at the shooting that happened in Jacksonville last weekend.

As we await further details, our hearts are with Jacksonville and all those affected by today’s tragic mass shooting. ♥️

“As we await further details, our hearts are with Jacksonville and all those affected by today’s tragic mass shooting.” Ivanka Trump tweeted on Sunday. Reactions across the right where similar to Ivanka’s tweet: short on policy prescriptions and heavy on “thoughts and prayers” style rhetoric.

The shooting in Jacksonville occurred at a Madden tournament and left two dead and 11 injured. The alleged gunman David Katz, 24, a white man, was angry after losing and subsequently opened fire on fellow competitors. Katz had recently purchased two handguns and had attached an aftermarket scope to one of the weapons prior to the attack.

In a sharp contrast to the president’s reaction to Tibbetts’ murder, there were no tweets. There were no stump speeches invoking the victims. There was nothing at all.

This is part of a disturbing trend in Trump’s presidency. Murders committed by non-white suspects result in tweetstorms and urgent proclamations about border security or harsh sentencing. This results in radical, draconian immigration proposals. By contrast, gun violence perpetrated by white men warrants hardly a mention and generates no policy.

Republicans outside the Trump family offered the similarly muted reactions we’ve come to expect from the GOP when it comes to gun violence. Sen. Marco Rubio (R-Fla.) also tweeted about “needing more information” while Gov. Rick Scott kept his words focused on the law enforcement response to the shooting.

Owens, who spend so much energy discussing the Tibbetts murder, also had nothing to post about the events in Jacksonville on social media. Her co-worker at TPUSA, Charlie Kirk, dedicated just one tweet to the shooting, asserting that Katz “was a raging liberal.” Previously, TPUSA has released a 20-page document arguing that gun control doesn’t work.

If gun control worked, Chicago wouldn't have had 625 gun deaths last year. Almost all of them were with handguns, not "assault rifles"

Why this disparity? The answer is simple politics. While Republicans continue to avoid committing to any kind of gun control legislation while collecting NRA lobbying cash, they are betting their prospects in the midterm elections on anti-immigration rhetoric and racial animus.

Though they’ve seen a recent bump in approval, Republicans continue to lag behind Democrats in the polls. Pundits are increasingly confident that Democrats will regain control of the House and potentially the Senate as well. In Tibbetts’ death, Republican see an opportunity to sell their message while the events in Jacksonville merely represent a liability. GOP candidates across the country are using a similar line to one being rolled out by Kansas Republicans, “Open borders, amnesty—a risk we can’t take,” and stories like the tragedy in Iowa play right into their preferred narrative.

Republicans see immigration control, or, more specifically, the promise of immigration control, as the way to motivate their base. Though logistics and political realities make his border wall less likely every day, Trump continues to use the wall as a talking point. In fact, in July Trump claimed the wall was under construction, even though it isn’t. Last week, the White House held a “special ceremony” honoring ICE and Border Patrol officers.

Contrast this with gun control, which, though much more popular than any form of immigration crackdown, remains absent from Trump’s rhetoric, and the messaging of the Republican Party as a whole.

Because to the Republican party right now, some murders aren’t about the victims. They’re about getting what they want. And what they want is a fix to the real problem facing this country.