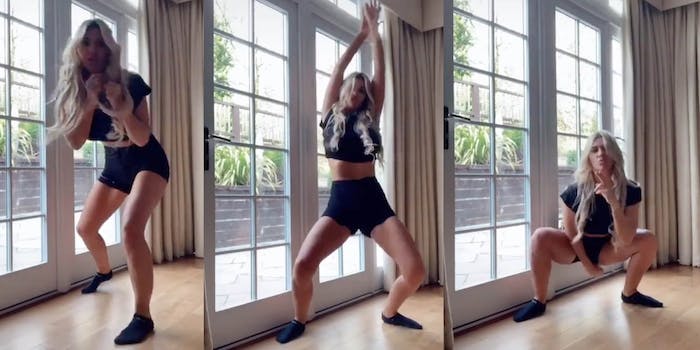 Model says TikTok removed her dancing video for being too ‘sexual’

'TikTok is ticking me off.'

British model Christine McGuinness on Tuesday expressed her frustrations with TikTok after the app deleted one of her videos. She argues the clip didn’t break the platform’s rules against sexual or violent content.

“TikTok is ticking me off,” McGuinness wrote in an Instagram post. “I was wearing jeans and jumper, didn’t flash a nipple, it wasn’t sexual, violent or dangerous!. WTF? Is this just me or anyone else?”

The video shows her dancing to the song “Outwest” by Jackboys featuring Young Thug.

McGuinness has posted on TikTok since March 20 and has accumulated more than 23,000 followers. Many of her videos are comedy sketches that include her husband, Paddy McGuinness.

Many commenters supported McGuinness, writing that she was just trying to make people laugh.

“Omg that’s bad isn’t it,” Joanne Duffy wrote. “Some people will put stuff way worse than you and still get away with it won’t they, your only trying to have a laugh hun they need to lighten up.”

Another commenter wrote that TikTok frequently removes her daughters’ videos, too.

“This happeneds to my daughter alot and she gets so upset,” Vicky Gibson wrote. “If you found out the reason we would love to know.”

McGuinness did not immediately respond to the Daily Dot’s request for comment.

In its community guidelines, TikTok notes that “sexually explicit or gratifying content” is not allowed on the app because it carries risks, including triggering legal penalties.

TikTok also notes that content for “educational, documentary, scientific, or artistic purposes” are exceptions to this rule.