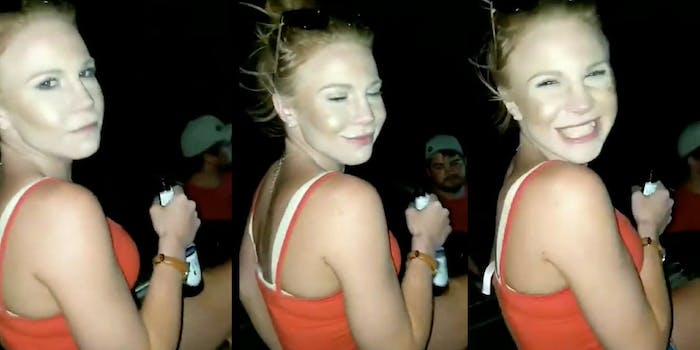 One woman has been fired from her job over it.

A white Missouri woman has been fired from her serving job and is being investigated by the U.S. Air Force for using the N-word in a disgusting Snapchat video in which she and others say they are “N***** hunting.”

In the video, Jefferson County resident 20-year-old Tabbie Duncan appears to sit atop a car in motion while two men around her shout about the racist, dehumanizing activity before she herself chimes in approvingly of the behavior. The Riverfront Times called the video, “pretty standard small-town idiocy, until a mostly off-camera narrator starts in with some jarring racism.”

The video’s dialogue goes as follows:

Narrator: “So we going N— hunting today or what?”

Narrator: “Look at my soon-to-be sister-in-law. Look, she looks so pretty.”

To which Duncan stares at the camera before scrunching up her face in a smile.

The video, uploaded to Facebook by Kalle Bates, can be viewed below:

According to the Times, Duncan’s workplace, Social Bar and Grill in St. Louis County, fired her from her serving position following the video’s circulation on Facebook. In a statement made on Facebook, the restaurant denounced Duncan’s behavior, stating what was in the “vile, disgusting, and offensive video” will not be tolerated.

Duncan’s behavior has also been reported to the U.S. Air Force too, where she is a new enlistee. In a statement to the Times, a spokesperson said the military branch has been made aware of the video and is “looking into the matter.”

“We have been made aware of a video online of an alleged reserve Airman who made racially insensitive comments. We are looking into the matter and we appreciate this being brought to our attention. The U.S. Air Force values diversity and inclusion; our Airmen come together to produce an incredible team that can accomplish any mission and overcome any challenge. We believe that our greatest asset is our diverse, innovative and technically-savvy workforce. Our Airmen come from all backgrounds and remarks such as these do not fall in line with our culture. We take incidents like this very seriously and action will be taken upon further investigation as necessary.”

The Times noted that Duncan posted a statement to her Facebook page about the video before deleting her page altogether. Prior to the deletion, however, her page featured pro-Trump memes and a meme attacking NFL players who kneel for the national anthem in silent protest.

The Snapchat video shows the video was posted to the account of a Brianna Haas. According to Heavy, Facebook screenshots show that Haas and a man named Joshua Davenport were engaged, though it’s unclear if Haas and Duncan are biologically related or are close friends. Haas and Davenport have also since deleted their Facebook accounts. Heavy, however, has found an Instagram account for a Brianna Haas that features photos of herself and Duncan.

Neither the Times nor the Root mention the two men in the video, one of them acting as the narrator behind the camera and the other seen in the background also echoing the phrase. If anyone has information on the identities of these men, please feel to contact [email protected]