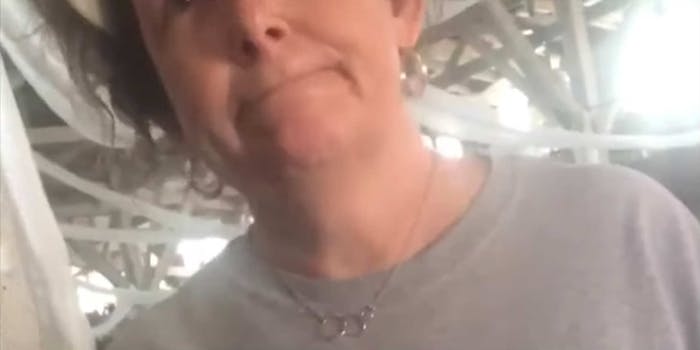 'We don't do gay weddings or mixed race.'

Owners of a Booneville, Mississippi, venue have apologized after refusing to host an interracial wedding because of their “Christian beliefs.”

According to Wave 3 News, a Black man and his white fiancée contacted Boone’s Camp Events Hall, hoping to view the space and rent it for their wedding. The owner initially agreed to meet with them and give them a tour but later wrote a last-minute message to them, stating she refused to host the couple because of her “beliefs.” The couple responded by asking what those beliefs were, and the owner ignored the message.

So the groom’s sister, LaKambria Welch, decided to go down to the venue, camera in hand, and ask the owner herself. She later posted the footage to social media.

“First of all, we don’t do gay weddings or mixed race [weddings],” the woman in the video, one of the venue’s owners, says.

Boone’s Camp Event Hall in Booneville, Miss cancelled a couple's wedding after learning that the couple was a black man & a white woman.

This woman who works there says that gay weddings & mixed race weddings are against their “Christian belief.”pic.twitter.com/M62La7qEbq

When Welch asks why not, the woman responds, “Because of our Christian race,” but corrects her Freudian slip and says, “I mean, our Christian belief.” Welch explains to the owner that her family is also Christian and questions which part of the bible restricts interracial marriages, but the owner refuses to respond.

“I don’t want to argue my faith,” the woman responds.

The video went viral, with many calling the woman racist and hateful.

“Never seen a clearer example of ‘Christian faith’ as an ideological cover for racism and white supremacism,” one user commented on Twitter.

Never seen a clearer example of "Christian faith" as an ideological cover for racism and white supremacism.

Attention Boone’s Camp Event Hall – Christianity is NOT a Race!! You are nothing but hateful racists hiding behind your Bible Mississippi Wedding Venue Refused Mixed Race Couple Citing 'Our Christian Race' https://t.co/6h3ZxR8gss

In response to the controversy, the City of Booneville released a public statement on Facebook, taking a firm stance against discrimination.

The City of Booneville, Mayor, and Board of Aldermen are aware of the comments recently made by a privately owned…

Posted by City of Booneville on Monday, September 2, 2019

The owner featured in the video issued an apology on Facebook, calling her belief that Christianity forbids interracial marriage “incorrect.” The owner said that she consulted her pastor after church and studied the Bible for days, looking for a verse that would support her decision. She ultimately came to the conclusion that she was wrong.

“To all of those offended, hurt or felt condemn by my statement I truly apologize to you for my ignorance in not knowing the truth about this,” the post read, per the Washington Post. “My intent was never of racism, but to stand firm on what I ‘assumed’ was right concerning marriage.”

Yet, in the same post, she also inadvertently implied that it was not just her Christian beliefs–if at all–that shaped her outlook on interracial marriages.

“As a child growing up in Mississippi our racial boundaries that were unstated were that of staying within your own race,” she wrote. “This was never verbally spoken, but it was an understood subject.”

The Facebook page for Boone’s Camp Events Hall has since been deleted.

The Daily Dot has reached out to LaKambria Welch and Boone’s Camp Events Hall for comment.