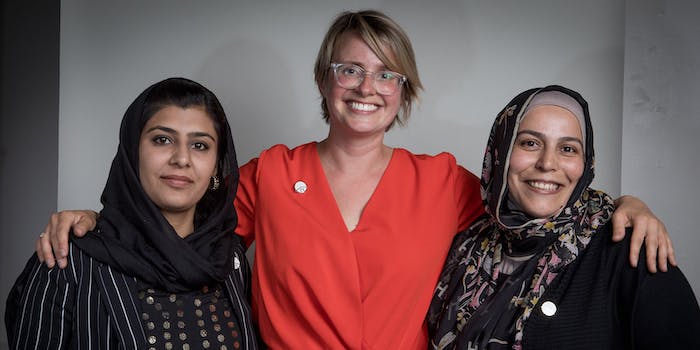 'This is what the purpose of the internet is all about.'

As far as Ghaz Bazrafshan was concerned, it made perfect sense that she would move out of her apartment, and in with her mother, so that two teenage refugees from Iran would have somewhere to live. “She said, ‘It’s the least I can do,’” recounts Miry Whitehill, shaking her head in awe.

Whitehill, the founder of Miry’s List, a Los Angeles-based nonprofit that supports resettling refugee families from the Middle East, has lost count of how many times she’s been stunned by similar acts of generosity. Whether it’s donating a Cuisinart appliance, a box of diapers, or an entire furnished apartment, the willingness of strangers to lend a hand to those in need is constantly humbling to Whitehill.

“My family had to flee soon after the revolution in Iran in 1979 because of political persecution,” Bazrafshan tells the Daily Dot. “What mainly motivated my decision was thinking about people who helped my mom and myself when we were in a similar situation when I was just 2 years old, and also how different life would be if there weren’t kind people to help us get settled. I wanted to make sure they felt as much kindness as I could to ease the very tough road they had ahead of them.”

“This is what the purpose of the internet is all about,” Whitehill says. “It’s about sharing, and it’s about being networked together.

The Federal Resettlement Program, through which all refugees are vetted and processed, contracts with nonprofit agencies that provide a range of services to aid recent arrivals in adjusting to their new environments. They are, however, spread incredibly thin. In 2018, nearly 23,000 people were welcomed into the U.S., and while this number is well below the 45,000 cap, there simply aren’t enough caseworkers to effectively provide the level of assistance necessary to help new arrivals acclimate. What’s more, last year 20 refugee resettlement agencies were closed across the country, with more than 40 ordered by the State Department to scale back their operations.

According to Whitehill, it’s not unusual for multiple families to be housed together in one-bedroom apartments or tiny motel rooms, and they’re not given the proper resources to rebuild their lives. From finding a job to learning English to getting a driver’s license, refugees are oftentimes navigating their new and foreign surroundings solo. That’s where Miry’s List steps in.

The nonprofit has developed a three-stage program, beginning with “Survive,” which helps provide temporary housing, food, and urgent supplies to new arrivals. The next step, “Hive,” includes pairing the family with a volunteer who works with them to build an Amazon Wish List. This includes items they need to start feeling more at home, from laundry detergent and sheets to children’s bicycles and backpacks. Families make it to “Thrive,” the third phase, as soon as they’re settled in, feel safe, and begin to ask how they can volunteer and pay it forward.

“I don’t think there is another environment or ecosystem or even time period that Miry’s List could’ve started in, because right now people have the internet in their pockets pretty much all the time,” Whitehill says.

She explains that thanks to this constant connectivity, more than half of their families’ Wish List purchases happen on mobile devices. By capitalizing on this, the nonprofit has made contributing to its cause simple and accessible at the tip of anyone’s finger.

There is no donation too small, and Miry’s List is able to employ eight people, five of whom are graduates of the program, in large part thanks to individual monetary donations that amount to about $25 per donor per month. What’s most important to Whitehill, however, is not commodities or money. It’s what these things represent: connection. Connection between families of disparate backgrounds, and connection between refugees and their new, unfamiliar, surroundings. The question she’s always asking is, “What do you need to make your house feel like a home?”

Thanks to Rabia Ahmadi, Miry’s List’s director of family services, Whitehill is able to open this dialogue with new arrivals in their native language. Ahmadi, who moved to Los Angeles from Afghanistan in December of 2016, speaks four languages—English, Persian, Pashto, and Urdu. In addition to being able to converse with families in their own tongue, she’s also able to relate on an emotional level because she’s experienced the resettlement process firsthand. She, her husband, and their two children—now 6 and 7—lived in a motel room for three weeks before they were able to find an apartment that would rent to a family with no American credit history.

Ahmadi was introduced to Whitehill by the motel’s manager and was the nonprofit’s first hire. She says she’d help whether or not she received a paycheck. She says that many refugees are wary of aid because they’ve already been given false hope from other organizations that don’t end up following through on their promises of assistance. She loves being able to confidently reassure them that Miry’s List follows through with action. 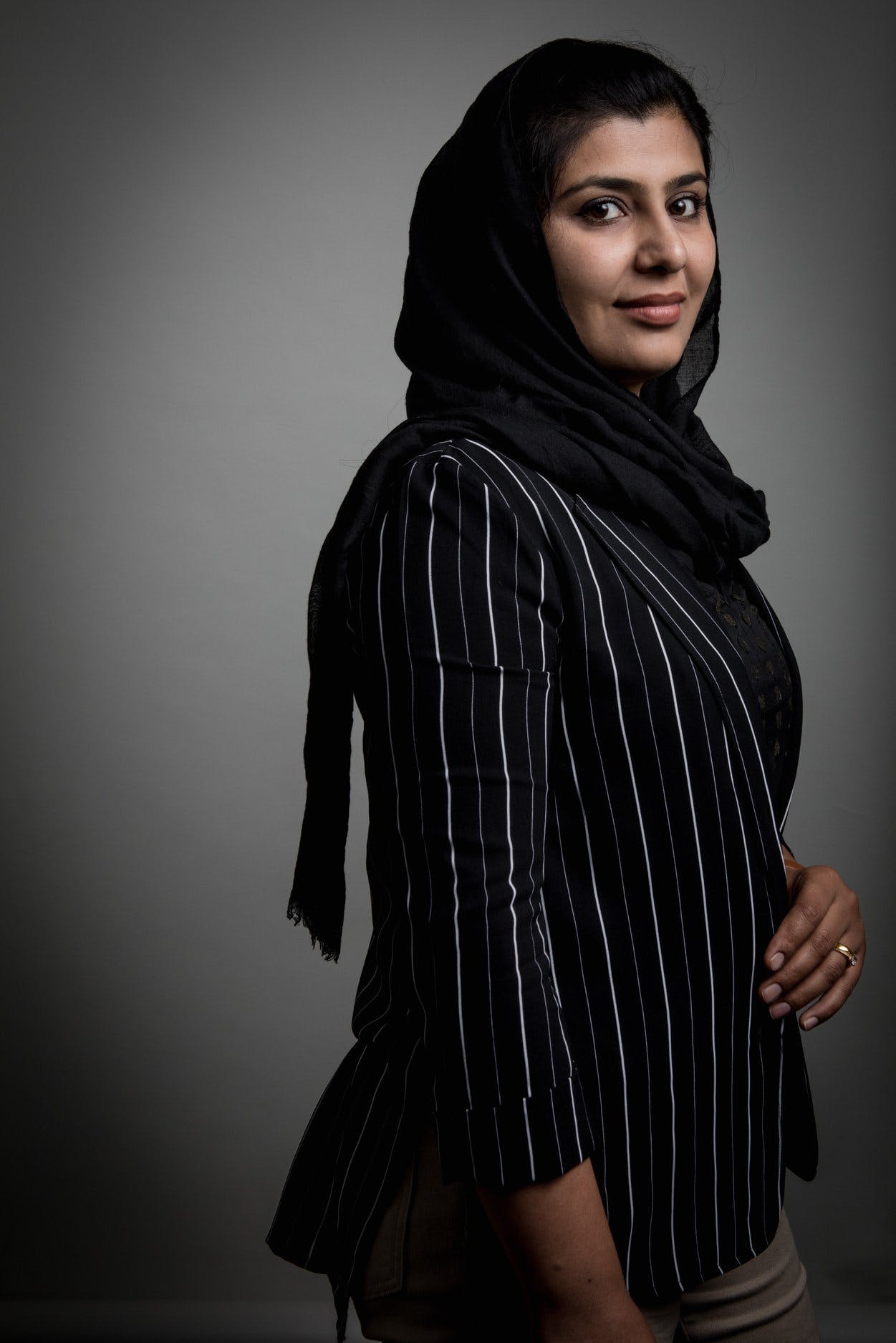 “I’m really proud of Miry because whenever she sees something she just doesn’t talk, she helps—she just does something at the right time for the right people,” Ahmadi says. “Like whenever she meets a family and she sees that they are sleeping on the floor, she doesn’t say, ‘Oh, I’m sorry for that.’ Maybe she says it in her heart, but she goes and she finds the resources to prepare the bed for them. A lot of people, they cannot do like this.”

At its foundation, Miry’s List is an extension of the moms group forums that flourish online. Primarily found on Facebook, mothers in these groups lean on each other by posting to message boards asking for advice, hand-me-downs, or just a listening ear. Before Whitehill created Miry’s List in July 2016, she was a stay-at-home mom with a 2-year-old and a 6-month-old who relied on the support of her local online group, Eagle Rock Moms.

Through a friend, she heard about a refugee family from Syria who had just moved into her neighborhood and needed a Jumperoo bouncer for their baby. As luck would have it, her youngest had just grown out of his. When she dropped it off and saw the family’s empty apartment, she felt compelled to act.

Since then, Miry’s List has helped more than 300 families thanks to donations from more than 75,000 people. With the refugee crisis only continuing to grow—according to the latest report from the office of the U.N. High Commissioner for Refugees, 70.8 million people were forcibly displaced at the end of 2018—Whitehill is more dedicated to the cause than ever, with the goal to serve 3,000 families over the coming three years.

The nonprofit enrolls on average five families per week, all of whom hear about Miry’s List through word of mouth. And while the organization has received a fair amount of press, with coverage ranging from Vice to the Washington Post, donors also tend to learn about the cause through social media networks and friends of friends.

“I have not approached anyone with the ask,” Whitehill explains. “It’s always been people coming to us saying, ‘This is what I have to give, can I help?’ That’s how we built our community.”

These people include chef David Chang of Momofuku fame, who posted an Instagram story about a family’s Amazon Wish List that resulted in its fulfillment in a matter of minutes. Or “Office Space” actress Jenna Fischer, who designed a “Finer Things Club” collection based on a storyline from her TV show’s character, with proceeds benefiting Miry’s List. Even The Price Is Right has furnished refugee homes with prize overflow.

“You think of a company like The Price Is Right as this big brand that’s funded by this big television network, but at the end of the day, there’s a prize warehouse that’s managed by one woman who has a baby,” Whitehill says. “Her best friend heard about Miry’s List and donated to us, and she wanted to do the same thing.

“That’s happening an exponential amount of times, multiplied by three years, multiplied by 320 families,” she continues. “It’s a lot, and we’ve been able to accomplish it using the model of just connecting people.”

To that end, Miry’s List doesn’t stop at transforming houses into homes. It also has a New Arrival Supper Club, through which it’s been able to pay resettling chefs more than $100,000 in wages through 54 sold-out events. From Mother’s Day brunches to Valentine’s Day dinners, at least once a month, the Club invites the public to a taste of Middle Eastern culture and food, cooked up by the refugees themselves.

“It doesn’t take a village, it takes the world, and that is what we’re all about,” Whitehill says. “We’re about making it really easy and really enjoyable for anyone to do the right thing. To make their neighborhood more welcoming and to be good neighbors, that’s what we want.”