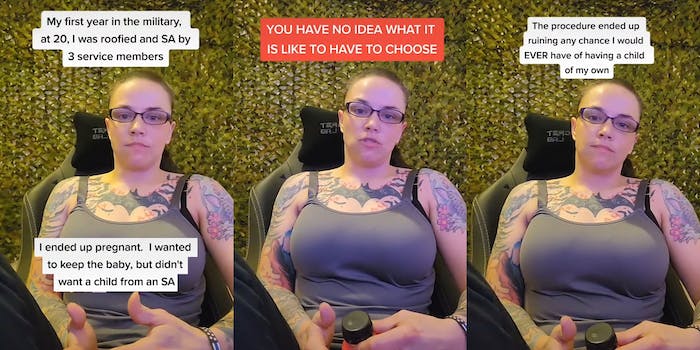 'The military sweeps too much [sexual assault] under the rug and it needs to stop.'

The trend seems to have stemmed from a video posted by TikToker @biblebeltskeptic in early February which references the song. Everlast’s lyrics describe a woman who gets pregnant, and when her boyfriend leaves her, she gets an abortion and is called a killer, sinner, and a whore outside the abortion clinic. The lyrics have a renewed meaning in the wake of the Supreme Court draft leak, now that the federal right to abortion may be overturned in America.

TikToks from female veterans under the TikTok sound have a specific resonance because reporting their assaults and/or getting an abortion sparked backlash from their peers and superiors in the military, causing some to leave the service.

In a TikTok from DV (@dv.bot) posted on May 9, she says that she was drugged and sexually assaulted by three of her service members during her first year in the military. She got pregnant from the assault and says that the officers who assaulted her were not penalized.

“I asked for help, and got ignored,” DV said of wanting to get an abortion while in the military. She says that after “secretly” going to an out-of-state clinic and getting an abortion, she was called a baby killer and retaliated against. Her TikTok had almost 780,000 views on Thursday.

Veteran Kim (@healingwithkim) told a similar story in a TikTok she posted on May 8. She says her supervisor sexually assaulted her, which resulted in her getting pregnant, and after reporting the assault, she was retaliated against and sent home “on leave.” Kim says she went to a clinic alone to get an abortion.

“And when I returned [to the military] they decided to not pursue the trial because I ‘got rid’ of valid ‘evidence,'” Kim says in her TikTok, which had over 300,000 views on Thursday. “You have no idea what it’s like to have to choose.”

Kim and DV are not alone in their stories: TikToker @.dezuhray says that she was raped by multiple men she served with, and @meiraebaby shared in a TikTok that she was sexually harassed and assaulted. Both woman indicated that they had had abortions after having been assaulted.

“Soldiers don’t get to pick where they are stationed,” @meiraebaby wrote in her caption of her video. “Victims don’t have a say in if they’re raped or not.”

“Because [victims] experience in the aftermath of the assault was handled so ineptly or met with hostility and retaliation, many felt they had no choice but to separate,” the report reads. The report included more than 80 recommendations on how to reform the culture and increase support services for victims of sexual assault.

In an email to the Daily Dot, DV explained that she shared her story on TikTok to show other people that have been sexually assaulted that they aren’t alone, and to encourage them to do the same.

“For others in the military that have been [sexually assaulted], do not be afraid to stand up and have a voice. You did nothing wrong and deserve to be heard and taken care of,” DV told the Daily Dot. “The military sweeps too much [sexual assault] under the rug and it needs to stop.”

The Daily Dot has reached out to Kim via Instagram direct message, and @.dezuhray and @meiraebaby via TikTok comment.