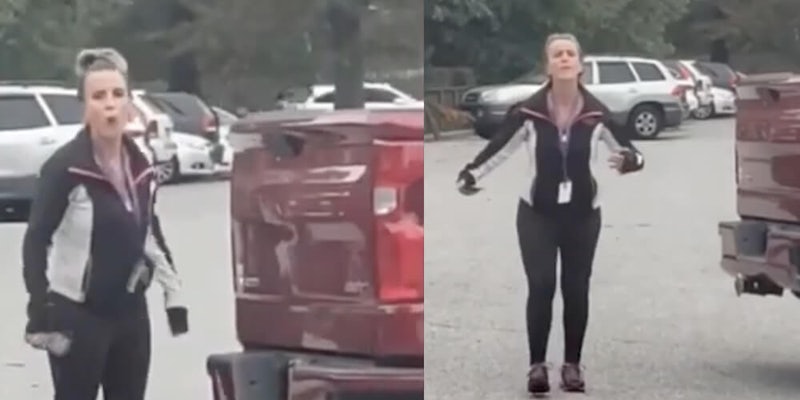 It started with a fender bender.

A Pennsylvania middle school teacher has been put on administrative leave after a parent recorded her racist rant.

“I commend the Upper Darby school district for taking quick action on this teacher at Drexel Hill Middle School,” wrote Rasheed Noel, the parent subjected to the offensive rant, on Oct. 10. “They are doing everything in their power to make sure people like this teacher become non existent in any school. Listen close at 1:17 what she calls me (N-word). She hits my car and acts like this on school property in front of students and staff. After meeting with the superintendent of Upper Darby school district and his staff, I’m here to say they absolutely care about their community.”

Listen close at 1:17 what she calls me (N****). She hits my car and acts like this on school property in front of students and staff. #ZeroTolerance#standup2racism

In the video, the teacher–who has been identified as Renee Greeley–tells the father that “you’re probably on welfare too.” When he responds by saying he makes “six figures a year,” the teacher says, “b*llsh*t.”

He tells her that she’s only angry “because I’m young, and I’m Black.”

She responds, “That’s right because you’re Black.” She continues, “Always looking to milk the system. And you see me, a white woman, so you think I’ve got money.”

Greeley eventually says, “Go back to your welfare, your Section 8 house.”

Toward the end of the exchange, Greeley loudly calls the parent the N-word. “F*ck off, [N-word],” she says.

As soon as Upper Darby School District Superintendent Daniel McGarry caught wind of the video, the school district stepped in to reprimand the teacher.

In a statement, McGarry explained the incident took place in the Drexel Hill Middle School parking lot after Noel and Greeley got into a small car accident. Noel’s child, a third grader at the school, was present in the car as Noel was dropping them off at school.

“The behavior, language, and treatment of one of our parents are not in keeping with our expectations of our teachers and staff,” the statement said. “The comments and actions made by this teacher do not align with our core beliefs of Opportunity, Unity, and Excellence. We will be working with our District’s Deep Equity Team to develop ways to develop ways to reflect on this incident with staff across the District.”

McGarry, who called the teacher’s rant “awful,” believes the teacher should be fired but explained that he doesn’t have the power to do so. “I do not believe anyone who conducts themselves this way should be allowed to teach,” he said.

It is unclear whether or not the school will follow through and fire the teacher or if she will resign after the embarrassing incident.