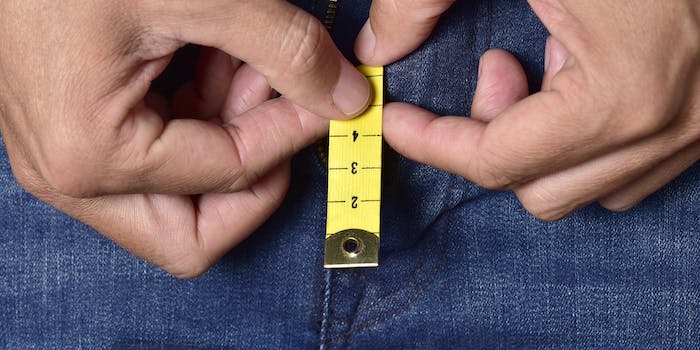 How sex with a micropenis can lead to more pleasure

Good sex is about thinking outside of what some consider 'normal.'

Micropenises are often the butt of a lot of jokes about fragile masculinity. A man in a fancy sports car driving with no muffler “must be compensating for something.” Donald Trump’s tiny hands are indicative of another tiny part of his body. The list goes on.

But for the 0.6 percent of the male population whose stretched penile length is less than 2.75 inches, it’s no joke—it’s simply their anatomy. And it’s a feature of anatomy that often leads to a lot of emotional pain, anxiety, and depression. One redditor took to r/confession to talk about his anxieties about his body:

“I’ve read just about every single article, study, and forum post about micropenises and the consensus is that women don’t get pleasure from penetrative sex at all. In movies, you see the two main characters get together and it’s very romantic, they kiss and start to have sex, they’re both moaning and loving it. It seriously breaks my heart to know that I’ll never be able to give a woman that experience. I know that I can learn to give cunnilingus (and I’ve read a lot on the topic), but it’s just not the same. Women talk about being “filled up” like it’s the most amazing feeling in the world. It hurts to know that I can’t provide that feeling. I’ve tried to kill myself before. I broke into a building and was standing on the roof about to jump, but I just couldn’t do it. I stayed there for hours trying to find the balls to do it, but apparently they’re small too.”

While this redditor’s pain is real, life with a micropenis isn’t always so bleak—or at least it doesn’t have to be.

Elizabeth McGrath, a Bay Area somatic sex therapist, explained to the Daily Dot how men with micropenises and their partners can get the most out of their sex lives. In addition to traditional talk therapy, where her clients discuss their thoughts and feelings, she also helps some of her clients through clothed, non-genital touch.

“I really practice this work and I believe in it, primarily because sex is of our bodies,” McGrath said. “When it comes to sex and relationships, I believe there’s only so much talking can do.”

For her clients with micropenises—and in many other situations—McGrath said the important thing to do is to shift the focus away from penetrative sex.

“So much of what keeps people down, makes them feel awful, are these ideas about what good sex is, and it’s a box, a very, very small box,” McGrath said. “For somebody with a micropenis or their partner, not fitting in that box is very painful.”

Instead, she helps her clients focus on what brings them pleasure and to get comfortable with that.

“There’s humping, there’s grinding, there’s rubbing the penis on the labia or on the side, and then it expands into ‘What kind of fun things can we do together?'” McGrath said. “Look at it as an opportunity to find new things rather than focus on one way of doing it specifically.”

For example, she emphasizes thinking of foreplay as actual sex. Oral sex doesn’t just have to be a “stopgap,” but can also be the main event.

Toys are also an option. Rings, vibrators, and even “extenders” worn over the penis are options for all couples.

“I think any augmenting toys can be fun. But more importantly, is it comfortable and does it feel good? Are you doing it because you enjoy it or is it because you feel like it makes you more normal?” McGrath said.

The dichotomy between “normal” and “abnormal” is a huge source of pain and apprehension for anyone who feels they don’t fit into the “normal” category when it comes to sex. And that includes “the reveal.”

A man with a micropenis may struggle to whether tell a potential partner about his anatomy before they have sex—and his partner, in turn, might not know the “proper” way to react.

McGrath said for the man, she advises him to do whichever feels more comfortable. But he shouldn’t worry about “warning” a new partner about his anatomy since that reinforces the idea that it’s not normal and something to be ashamed of.

“For a partner responding, I would say to allow their own reaction to be there—to not feel like they have to fake it or shut it down,” McGrath said. “If they want to be physical with the person, then the best reaction is, ‘I would like to know how to touch you.’”

So sex with a person with a micropenis isn’t that much more mysterious than sex with any new person. As always, it’s about finding what makes everyone feel good and, most importantly, having fun.