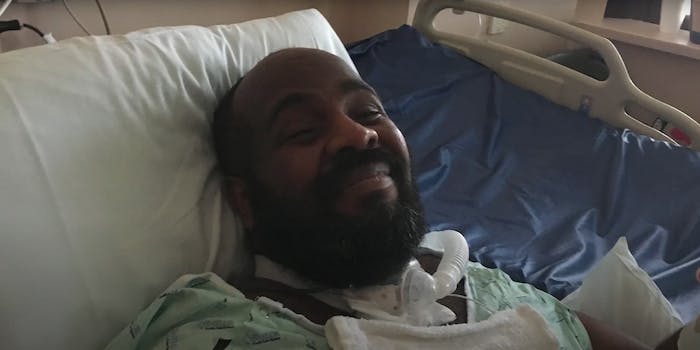 Audio recording reveals that healthcare professionals told his wife he didn't have a 'quality of life.'

A quadriplegic patient in Texas died after health officials told his family he didn’t “have much of” a quality of life, according to an audio recording of the conversation that surfaced online.

According to the recording posted on YouTube by pro-life group Texas Right to Life, Michael Hickson’s wife Melissa Hickson was told during a five-minute-long conversation that her husband, who had tested positive for COVID-19, was not going to get a feeding tube because it wouldn’t benefit him.

The Texan identified the professional as a physician at St. David’s South Austin Medical Center in Austin, Texas.

The physician goes on to say there’s certain criteria for intubation before the recording becomes briefly inaudible.

“Do we want to be extremely aggressive with his care, or do we want—do we feel like this will be futile?” the physician says.

“The answer is no to all of those,” he adds.

“What would make you say no to all of those?” Hickson asks.

“‘Cause, as of right now, his quality of life—he doesn’t have much of one,” the physician says.

“What do you mean? Because he’s paralyzed with a brain injury he doesn’t have a quality of life?” Hickson asks.

“Who gets to make that decision? … If [somebody has] a disability that their quality of life is not good?” she asks.

“So it’s not me, I don’t make that decision,” the physician responds. “However … Will it improve his quality of life? … The answer is no.”

“Why wouldn’t it?” she asks. “Being able to live isn’t improving the quality of his life?”

When Hickins asks about three patients who survived, the physician says her husband “doesn’t fit those three.” “Those three are young people that don’t have med. problems. This guy is young but he has a number of medical problems,” he adds.

“At this point, we are going to do what we feel is best for him, along with the state, and this is what we decided,” the physician says later in the conversation.

“So the fact that you are killing someone doesn’t make sense in your mind?” she asks

“We,” the physician replied. “Don’t think of it as killing.”

He later says that the decision was made by the medical community and Texas.

The description of the video further alleges that Michael Hickson was starved by physicians at the facility.

According to the Texan, Hickson was denied treatment, along with hydration and nutrition.

“Why are disabled people considered to have a poor quality of life?” Melissa Hickson told the Texan.

Michael Hickson tested positive for the coronavirus on May 15. He contracted it from a staff member at a nursing facility he was staying at, according to the New American.

After testing negative on May 25, he was reportedly taken to St. David’s South Austin facility for a breathing problem and a high temperature.

He was admitted to the Intensive Care Unit (ICU) the next day. He would be moved out of the ICU three days later as his condition stabilized.

In a statement released to its website, St. David’s said, Hickson’s “court-appointed guardian,” who they claim had the decision-making power over his wife, came to this decision “in collaboration with the medical team to discontinue invasive care.”

The “guardian” in question is an organization called Family Eldercare, which was assigned to Hickson while his wife was in court to determine who would be assigned his permanent guardianship, the New American reported.

“We live our entire lives in fear that one day a doctor will decide we just aren’t worth it,” he wrote.

Referencing the physician’s “quality of life” comments, Spohn said in a follow-up tweet, “I have tubes coming out of my body. I happen to like my life. Without those tubes I’d be dead. Our definition of quality is vastly different.”

Michael Hickson, 46, leaves behind his wife and five kids.