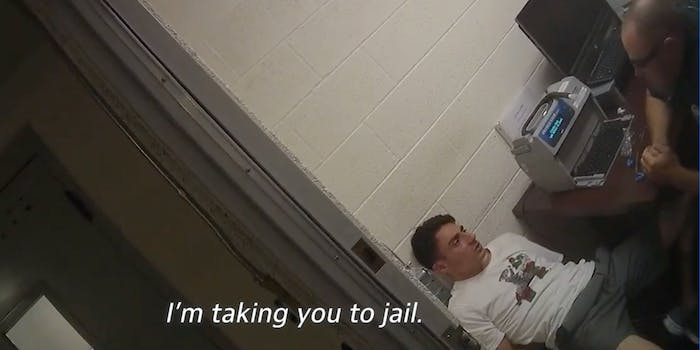 Video: Cop yells ‘You’re about to die, my friend!’ before fatally shooting man in police station

It was reportedly the officer's third killing.

On Aug. 23, 2019, 31-year-old Michael Chad Breinholt was arrested and charged with driving under the influence. While being processed at the West Valley Police Department (WVPD), Sgt. Tyler Longman reportedly fatally shot Breinholt.

As shown in the video, Breinholt is taken into police custody. He cries, lays on the ground, says he wants to go to “UNI”—or Huntsman Mental Health Institute, formerly known as University Neuropsychiatric Institute—and expresses confusion about where he is as well as where the police are taking him.

Breinholt then tells the officers that he has a gun in his pants and shoe. However, the officers appear to dismiss this claim as he had already searched for weapons.

“Fuck! He’s got my gun,” the officer says in the video. Longman then intervenes.

“You’re about to die, my friend!” Longman says before shooting Breinholt in the head and yelling, “Don’t grab the gun!”

Longman has reportedly killed two other people while on duty.

Footage of Breinholt’s death was released after his death. The report from the Salt Lake Tribune and FRONTLINE reveals more footage leading up to Breinholt’s arrest and his processing at the police station.

Shortly after her son’s death in 2019, Neese told KSL that she didn’t understand why officers couldn’t restrain Breinholt, which would have prevented him from attempting to grab an officer’s gun.

“What [the video] brings is more questions because I don’t know understand how they weren’t able to…. subdue him,” said Neese.

On a memorial website created by Neese, she wrote that Breinholt spent much of his adult life in substance abuse treatment centers.

“He was so inspired by all the counselors, therapists, and social workers who tried to help him,” said Neese. “He wanted to become a Music Therapist so he could help others.”

The Daily Dot has reached out to Susan Neese and the West Valley Police Department.