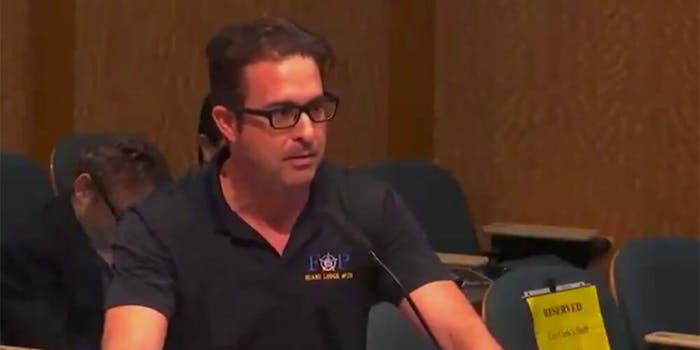 A Miami police officer named Javier Ortiz who previously listed himself as Hispanic and has a history of racism is now claiming to be Black.

The officer, who has a long history of making racist comments, made the claim to the city commission last week. When challenged by commissioners, who were in the midst of a discussion about racial equality within the Miami Police Department, Ortiz doubled down on his statement.

“I’m a Black male,” Ortiz said after the president of Miami’s Community Police Benevolent Association noted that he’d identified himself as Black on several police promotional exams. “Yes, I am,” Ortiz continued. “And I am not Hispanic. I was born in this country. That’s how I feel.”

A clip of the exchange has been making the rounds on social media, sparking fierce backlash.

#BREAKING: @MiamiPD Capt. @OrtizFOP tells city commission "I am a black male" after he was caught lying about his race on 2014 lieutenant's exam and 2017 captain's application — his original MPD application says he's white Hispanic #BecauseMiami pic.twitter.com/meaJ2mlQGn

When the commission asked how Ortiz had classified himself on his applications for the police department, Ortiz stumbled. “I think I put white male,” he said. “Well I know I put white male but I don’t know if I put Hispanic. Listen, I know who I am.”

The commission corrected him, noting that he put down Hispanic male. “OK, as a man I stand by it,” Ortiz responded. The commission then asked Ortiz when, exactly, he’d come to the realization that he was Black. “Well, I learned that there’s people in my family that are mixed and that are Black,” Ortiz said.

“Let’s not talk about the degree of blackness,” commissioner Keon Hardemon, who is Black, cut in. “Oh no, you’re blacker than me,” Ortiz chimed in. “That’s obvious.”

Ortiz then proceeded to launch into an explanation of the “one-drop rule,” also known as the “one Black ancestor rule,” “traceable amount rule” and “hypo-descent rule,” according to PBS. “If you know anything about the one-drop rule, which started in the 20th century, which is what identifies and defines what a Black male is, or a Negro, you would know that if you have one drop of Black in you, you are considered Black,” Ortiz said. “You’re probably Black too, Joe,” he informed Joe Carollo, a white commissioner.

The clip ends with Ortiz declaring himself a victim. “So now I’m being attacked,” he said. “Half of my family is Jewish, you probably didn’t know that either.”

After the commission dismissed Ortiz, commissioners made scathing comments. “Mr. Ortiz claimed that he was a Black, now we hear he’s a Jewish Black,” Carollo said. “I’m afraid maybe next month he’ll be, you know, a Black Jewish woman.”

Condemnation of the clip was swift and brutal. The Miami-Dade Branch of the NAACP shared the video on Instagram, calling Ortiz’s comments “disturbing.”

This is video of an active City of Miami cop at a commission meeting where the topic of discussion is on Racial Equity within the police department. . . His comments are disturbing. And in the manner of how he used them, downright disturbing to say the least. . .

The Miami New Times reports that Ortiz was suspended with pay after the commission meeting.

The chairman of the Miami-Dade NAACP branch told the Miami Herald that Ortiz should be fired. “The city should be made aware that the statement he made is incendiary,” Rubin Roberts said. “He’s not in any way considerate of Black men or women’s plight.”

Ortiz has been repeatedly disciplined for his behavior. In 2016, he was suspended for harassing a woman who filmed a cop giving her a ticket. He also shamed a female Muslim officer for not covering her heart during the pledge of allegiance. Over the course of his career, Ortiz has accrued 60 citizen internal complaints, according to the Miami Herald. He called 12-year-old Tamir Rice, who was shot and killed by a Cleveland police officer, a “thug,” and has repeatedly mocked the Black Lives Matter movement. He even went after Beyoncé, encouraging police unions to boycott her Super Bowl performance, which he called “anti-police.”

In response to the slew of news stories being written about him, Ortiz put out a single tweet. “This isn’t news. People love making stereotypes,” he wrote. “It’s actually refreshing to be who you are, like an American.”