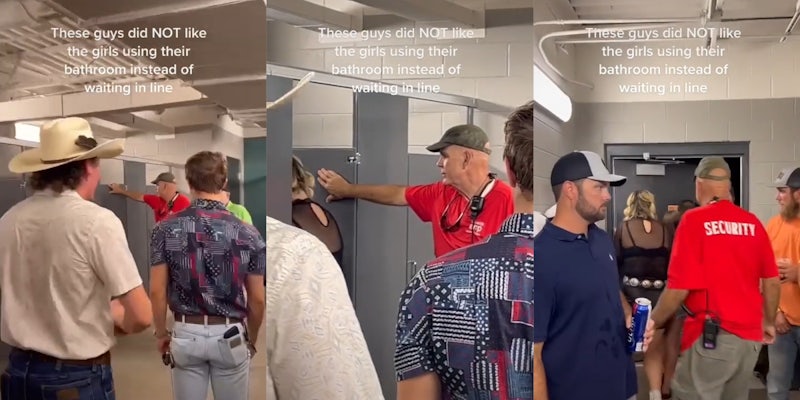 ‘A real man would have guarded the outside door’: Men kick women who didn’t want to wait in line out of men’s restroom, sparking debate

'Think about what would happen if a guy did that….'

A viral clip shared by Barstool University of Arkansas’ TikTok account (@barstoolua) shows a security guard escorting two women, who didn’t want to wait in line, out of a men’s bathroom stall. The video ignited a fierce debate among its over 6.9 million viewers regarding the women’s use of the bathroom and the men’s reaction.

Several of the men waiting their turn to use the bathroom clap and cheer—despite several other stalls appearing to be open—when the security guard instructs the women to leave. One man even shouts, “Let’s go Brandon.”

“These guys did not like the girls using their bathroom instead of waiting in line,” the clip’s text overlay reads.

The incident allegedly took place at a Morgan Wallen concert at Walmart Arkansas Music Pavilion in Rogers, Arkansas on Aug. 26, per the TikTok’s caption.

According to various reports, women are usually subjected to much longer wait times for restrooms than men are. Insider reported that in some instances, women spend as much as 34 times longer than men either waiting for a restroom. The outlet writes this is “mostly because women take longer — they menstruate, they have more clothes to remove, and they’re more likely to have children or the elderly with them.”

The New Zealand Herald also cited a research study from Ghent University that cites the design of these restrooms as the primary culprit for the excessively long queue times.

“Each stall takes up more space than urinals and, as such, for the same total area, women get a lot less ‘usable’ bathroom space,” the outlet writes. “Overall, the study found, an average toilet area can have 20 to 30 percent more toilets for men than for women (as male toilets have a mix of urinals and closed stalls). Male bathrooms, overall, can accommodate more people at any given time.”

This bathroom wait-time inequity may be the cause behind the debate that was sparked in response to the Barstool clip.

TikTokers seemed split down the middle as to whether or not the security guard made the right call in asking the women to leave the designated men’s restroom.

Some expressed that this was indicative of a clear double standard, speculating that there would be an outcry if a man was found in a women’s room.

“Cops would be called if a guy did this & used the ladies restroom bc the line was long,” one viewer said. “See the girls laughing? They thought it was cute & quirky.”

Others argued that it wasn’t very chivalrous of the men to cheer at the women’s exit and make them feel embarrassed for having to use the bathroom.

“A real man would have guarded the outside door so the ladies could go in peace,” one user wrote.

Other commenters began discussing the identity politics of gender and bathrooms, with many questioning the man who rattled off a “Let’s go Brandon,” chant, which is ironic rhetoric that was used by some to voice their distaste for President Joe Biden.

“Gotta feeling this was more about skipping lines and feeling entitled to do whatever they wanted,” one commented. “Not necessarily about gendered bathrooms.”

“I like how even in this scenario, people are somehow blaming Biden,” another added.

“Lets go Brandon ? why in this situation,” a third questioned.

A debate over gender-neutral bathrooms has been going on for several years in America, which many argue is deeply rooted in transphobia. There have been several instances of trans individuals being either denied access to or accosted for using a specific bathroom. Commenters on @barstoolau’s video have highlighted this debate, believing that the “Let’s Go Brandon” chant was a reference to a larger conversation on trans rights.

Additionally, several women in the comments said that they were put in situations where they had to use a men’s room and that they never experienced any issues in doing so.

“The only time I did this was when I was 8 months pregnant and my dad stood outside and told the men what was going on,” one user explained. “No one was upset”

“I mean, regardless of being a fellow Arkansas, as a man I’m thinking, is this a big deal?” a second asked. “Let the ladies do their thing.”

“Totally understandable they would be mad but sometimes my period can’t wait for a bathroom line,” a third stated. “Especially after having cancer my cycle is nuts.”