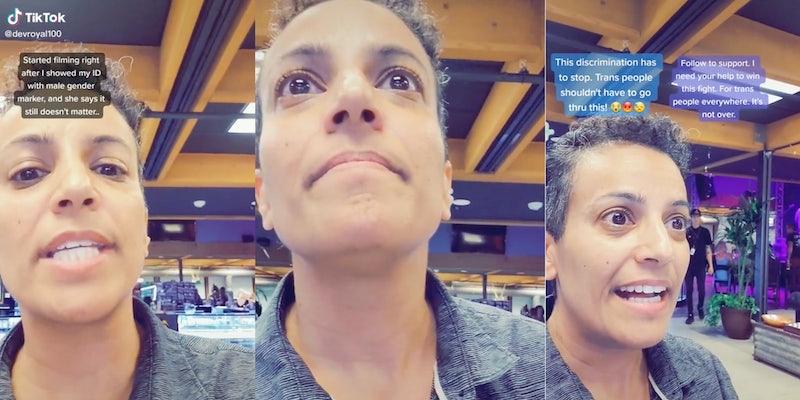 He’s now looking for a pro-bono lawyer to help him sue for discrimination.

A transgender TikToker recently took to the platform to share an experience at Four Twenty Bank in Palm Springs, California where he says he was denied access to the men’s bathroom.

@devroyal100 says he started filming after he showed his ID with a male gender marker to an employee there. The employee reportedly said that was “not enough” and refused to let him use the men’s restroom.

Once the TikToker begins recording, the employee—who is off-camera—calls him “aggressive.” The employees then proceed to misgender him.

“This is extreme transphobia,” he said. “You should be fired. What you’re doing right now is extremely transphobic.”

His video has gained nearly 80,000 views. In the caption of the TikTok, he said he was “kicked out & banned” from the dispensary. Viewers sent messages of support in his comments and claimed to have left negative online reviews for the facility. The Yelp page for the business currently has a “Unusual Activity Alert.”

“Leaving the worst review for them! SMH everyone deserves respect! I’m sorry you were treated so badly,” one user commented.

“I can see the hurt in your eyes,” another said. “People just need to let others live their lives in peace. Why are they even guarding the bathroom anyway??”

“I wish everyone would accept everyone for who they are,” wrote a third person.

@devroyal100 said he’s looking for a pro-bono lawyer to help him sue for discrimination. He said he believed the attack was “targeted.”

“I’m pretty sure laws were broken. I need help with this, though,” he said. “I can’t really afford going up against somebody with that much money and prestige. Please reach out to me if you know anyone that’s willing to help a trans man sue for discrimination.”

Additionally, he said that the woman who was transphobic to him, reportedly dispensary co-owner Julie Montante, is on “multiple LGBTQ boards” in the Palm Springs area. “A person like that should not be on those boards,” @devroyal100 said.

The Daily Dot has reached out to @devroyal100 and Four Twenty Bank for comment.