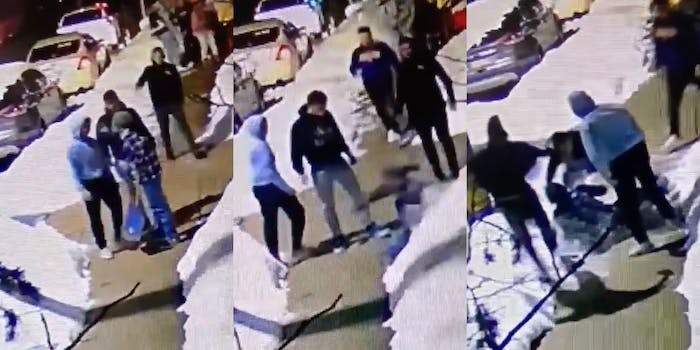 Ying Ngov, 56, says she blacked out during the attack.

Security camera video shows a group of men brutally attacking a Chinese pizza shop owner after they robbed her. This incident took place amid a pandemic-long spike in anti-Asian racism.

The security footage shows the men lurking outside the pizza shop and looking through the windows before donning masks and running inside. They can later be seen running out of the store after allegedly stealing beer.

Ngov then exits the shop in pursuit of the thieves, holding her neighbor’s snow shovel for protection. But the men overpower her, and one of them shoves Ngov into a pile of snow on the sidewalk.

When Ngov gets up, another man punches her in the face. The robbers then take turns violently beating her while she’s on the ground.

Ngov reportedly blacked out during the attack, telling ABC 6, “I don’t know nothing from when they beat me up until I get up.”

Her family has filed a police report, though they have yet to hear anything on the investigation. Meanwhile, Ngov has a message for her assailants: “Don’t do bad like that because people work hard every day.”