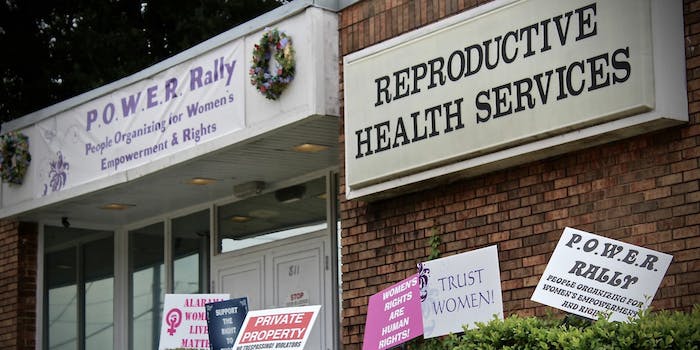 From Cory Booker to Arsenal's Héctor Bellerín, men are talking.

Roe v. Wade was challenged through restrictive anti-abortion bills in six different states last week. There is the so-called “heartbeat bill” in five of the states, Georgia’s law that could potentially punish women who travel out of state to get an abortion, and Alabama’s bill that punishes doctors who perform abortions and doesn’t allow abortions even for victims of rape or incest. The renewed policing of women’s bodies is at the forefront of online discussion, and even conservative pundit Tomi Lahren spoke up against it.

Of course, men rarely have to worry about the repercussions of having an unwanted pregnancy despite having a full role in unwanted pregnancies. Over the weekend, this sparked a Twitter discussion calling on men to share how having their partner’s abortions benefited their own lives.

Arsenal soccer player Héctor Bellerín drew attention to the issue as well, urging other men to own up to the role they play in pregnancies and share their accounts.

I wanted to see if anyone from our industry would speak out about the abortion bill, but I guess people are too scared. This isn't just an issue for women, it's one for every human being. We fight for equality and this is something men should fight for and not hide away from.

1- I to went through something similar with my then girlfriend, now wife. I was 21 at the time. We went to a McDonalds, so she can take a pregnancy test. She came back out crying, and I already knew the answer. I remember thinking, how I WASN'T able to think. Just really scared.

As an 18 year old man, I would greatly benefit from having the option for my loved one. I would never be a deadbeat dad but I want the very best conditions for my child. If I am not in a position to do that, we need this option. This undoubtedly affects men too.

This is exactly what my husband said. He said "abortion is a men's issue too"–not because men should get to have a say, but because he and others have had their asses completely saved by it.

The conversation isn’t just happening on Twitter. In an open letter published via GQ, Sen. Cory Booker (D-N.J.) on Friday wrote about the need for men to start speaking up about their experiences with abortion.

“For men, abortion is not something many feel the need or desire to talk about—it’s too uncomfortable,” he wrote. “But that’s a trap—and one we need to get out of immediately. Men need to acknowledge that they benefit from abortion rights and reproductive health care, too.”

Booker and other men drew online backlash: Many men responded to their posts with their personal accounts of how they were “responsible” or “man enough” to have gone through with the pregnancy of their partners, and chided these men for not doing the same. They seemed to miss the point that pregnancy is a unique experience for literally every couple and not all women have the support from their partners to even see a doctor with them, let alone raise a child. Furthermore, not all pregnancies happen because the involved parties weren’t being “responsible” enough—sometimes, unwanted pregnancies can arise despite taking precautions.

A long time ago an ex of mine got pregnant. We had used birth control but it still happened. We thought we were being safe enough. It was her choice to abort and I supported her. I'm so grateful we had access to abortion. Men, tell your side of the story. #ProChoice

An ex and I always used birth control but she got pregnant. She was taking a medication that would adversely effect the pregnancy and she decided to abort. I supported the decision because it was the best choice for her health. Since she's had two wonderful kids. #ProChoice

I have the exact same story, and i'll fight for this freedom in any and all capacity.

Years ago, my ex supported me through an abortion. There will always be some great men who stand by their women in this difficult decision. The bigger issue is a woman’s right to control her body. I’m saddened that some states are trying to push women’s rights back 46 years.

The abortion my Mom had is what allowed her to later have me. Had that child been born, I most assuredly wouldn’t have. I owe my life to my mothers right to choose.

I’ve never talked about it publicly, but men can Ill afford to be silent. We owe women our voices in support. https://t.co/qMDvyqWG3q

And that’s precisely the message Booker shared in his letter as well—beyond sharing their own experiences with abortion, men need to be allies in this situation not because of their relationship with women but because women are people, period.

This is especially crucial because there are men who speak loudly about their anti-abortion stances while personally benefitting from abortion in their personal lives. In 2017, Rep. Tim Murphy (R-Penn.) had to resign after it was revealed that he had asked a woman he had an affair with to abort her pregnancy. Rep. Todd Rokita (R – Ind.) has been exposed for being vocal about his anti-abortion stance while a political action committee affiliated with him donated thousands to the campaign of a congressman who had personally benefitted from the abortions undergone by his wife and a girlfriend.

There’s no doubt that men, too, benefit from abortions of unwanted pregnancies, and pro-choice Twitter is here for this allyship: