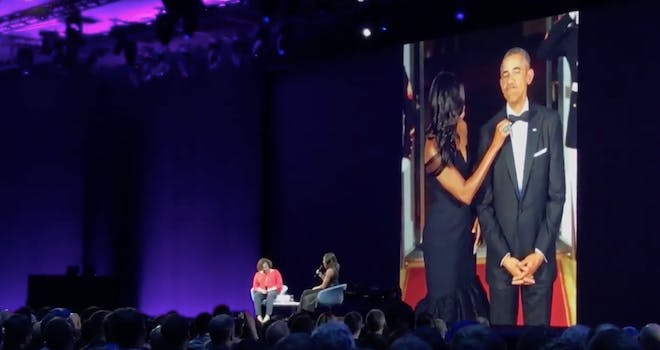 In his post-presidency days, Obama has been spotted in a cool leather jacket (which apparently he owned all along). There was also that one time in 2014 that Twitter went nuts over Obama wearing a tan suit while talking about war.

But in an interview Tuesday at Apple’s developer conference in San Jose, California, Michelle Obama said her husband got away with repeatedly wearing the same tuxedo to different events during his presidency.

“This is the unfair thing,” she said. “No matter what we do, he puts on that same tux. Now, people take pictures of the shoes I wear, the bracelets, the necklace. They didn’t comment that for eight years he wore that same tux… same shoes.”

He did, apparently, acquire a new tuxedo jacket somewhere between 2014 and 2015. But of course that’s nothing like the elaborate dresses and gowns the first lady donned for every occasion. Nevertheless, Barack was supposedly a bit smug about how little time it took him to get ready.

She doesn’t seem to mind so much—unless something was out of place. She explained why she adjusted her husband’s bow tie in a photo that gained viral traction in 2015.

“When the president from the visiting country and their spouse is coming, we greet them at the North Portico,” she said. “We were standing there waiting for the cars to roll in, and I was bored, so I sort of thought, ‘Let me make sure my husband looks good.’”