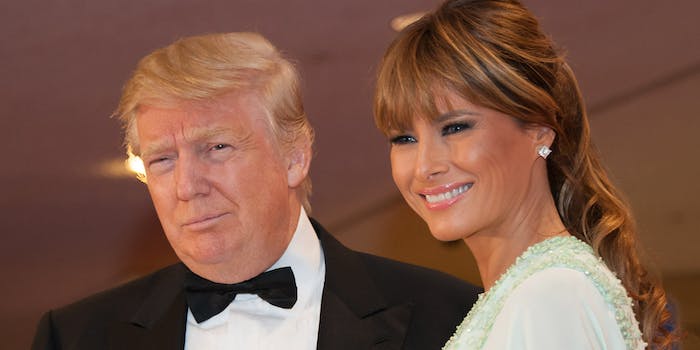 He tweeted at her, though.

Was the first lady neglected by the father of her child on Mother’s Day? Tweets from the first family and photojournalistic evidence reveal that president and Melania Trump celebrated the holiday in very different ways.

The New York Times posted a photo showing President Trump golfing on Sunday. It didn’t take long for internet to notice and suggest that he purposefully chose golf over his wife, instead wishing her a distant “Happy Mother’s Day” via his preferred form of communication, Twitter.

A tragedy in three acts pic.twitter.com/MYYOZFUzpF

OOf – that's not even a recent picture that she posted.

Others wondered if the first lady purposefully asked Trump to give her a day alone.

Question of the Day: Did Trump chose to not spend Mother's Day with his wife & youngest kid, or did Melania ask him not to?

His absence was probably the greatest gift he could give her.

The best place to be when you have a narcissistic spouse? As FAR away as possible. Believe me!

Meanwhile, others poked fun at Melania’s Mother’s Day photo shoot with their son, Barron, pointing out that it has slightly creepy undertones. A watermark suggests the photo was taken by Regine Mahaux in 2016, meaning that the Melania didn’t even post a recent picture celebrating Mother’s Day with her son.

The Trump family’s Mother’s Day raises ongoing questions about Melania’s distance from the White House and her husband. She has chosen to remain in New York since Trump took office, and has done little in the official capacity of first lady. A close look at her photographic tweets from 2012 to 2105 depicted a woman who viewed most things from inside Trump Tower. More recently, she liked a tweet making fun of her husband’s treatment of her during their marriage.