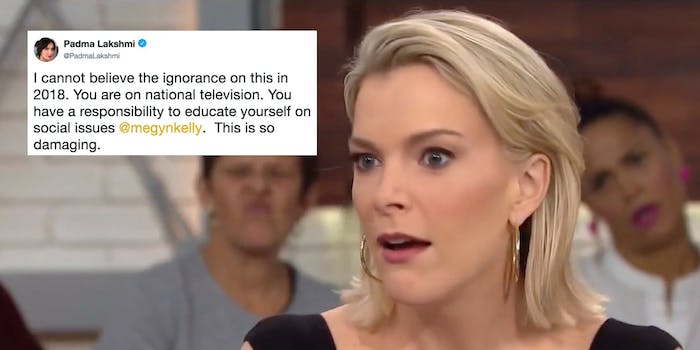 Megyn Kelly does not want to be told what she can and cannot wear, even if it means she’s going to reinforce negative stereotypes about people of color.

During Tuesday’s segment of her show, Kelly denounced new student union guidelines at the University of Kent in the United Kingdom pushing to ban costumes such as cowboys, Nazis, priests, nuns, Native Americans, Mexican stereotypes, and Harvey Weinstein.

The union did, however, suggest that people dress up as letters of the alphabet, to which Kelly suggested that she and her husband dress as the letters F and U.

However, Kelly’s confusion around being told to not reinforce negative stereotypes and wear purposefully shocking costumes seemed fixated on the inability for white people to wear blackface, or darker makeup that gives someone the “appearance” of having Black skin.

“Freedom of expression is a beautiful thing, so is freedom of speech. It’s part of why I like living in the United States of America. Because if you’re gonna dress like an idiot, act like an idiot, and actually dress and be racist, then somebody should say something to somebody. But you should still be able to dress like a moron,” NBC reporter Jacob Soboroff, who was on Kelly’s four-person panel, began.

Soboroff then cut in: “If somebody feels that something is offensive to them, then you should say it, and that’s fair game, and you should be able to take it if you’re going to dress up like that.”

“Yeah, you gotta be able to take it,” Kelly said, just moments after complaining about no longer being able to wear blackface without garnering criticism.

A few seconds later, Kelly went on to mention a “controversy” on the Real Housewives of New York about a character wearing blackface to dress up as Diana Ross, arguing that it was OK because it was Halloween.

“People were saying that was racist. And I thought, who doesn’t love Diana Ross? She wants to look like Diana Ross for one day. I don’t know how that got ‘racist’ on Halloween. It’s not like she’s walking around in general,” Kelly said.

“I haven’t seen it, but it sounds a little racist to me,” Soboroff said, with fellow panelist Jenna Bush Hager voicing agreement.

Perhaps Kelly thinks that it’s just OK to wear blackface on Halloween, but only then? Which is still flawed thinking. We shouldn’t get a pass to be racist for the day, only because it’s “all in good fun” and all in the “spirit of Halloween.” Negative reinforced stereotypes follow people of color around constantly, and no such “absolution” exists to make sure that such stereotypes aren’t reinforced on Halloween alone.

For Kelly and anyone else who missed this very important history lesson: Blackface was popularized by white performers dressing up as Black people (yes, in a black face) for minstrel shows—a form of entertainment at the expense of enslaved African-Americans pre-Civil War through the 20th century. These shows depicted Black people as dumb, lazy, overtly sexual, and as criminals. It is these stereotypes that still haunt Black people today and are thus deeply, deeply offensive. White people: Don’t do blackface.

Across Twitter, people are criticizing Kelly for her ignorance. Some have argued that she should have had a Black panelist included on this conversation, while others have dredged up Kelly’s baseless opinions regarding race—such as when she argued that Santa couldn’t be Black, but that Jesus was most definitely white, as a Fox News host.

I cannot believe the ignorance on this in 2018. You are on national television. You have a responsibility to educate yourself on social issues @megynkelly. This is so damaging. https://t.co/R7UJzkDDG9 https://t.co/7qFkqGHfGJ

interesting there’s no black person present to weigh in…

Today on Megyn Kelly Today: four white people decide whether or not blackface is racist. https://t.co/d7rWWwm2ML

The only time Megyn Kelly would have a problem with blackface is if the person is also dressed as Santa Claus https://t.co/LfObbMDVfU

.@megynkelly – "I don't get why Black face is so offensive?"

Dear @megynkelly — you and I are approximately the same age. Blackface was NOT okay when we were kids. Take it from a big-hearted boy who just wanted to show his love for Nipsey Russell on the worst Halloween of my life. https://t.co/pnsk0WmuTw

Every single person on this panel should be ashamed for not using this incredibly obvious opportunity to educate the public (and Megyn Kelly) about the history and legacy of blackface minstrelsy. Instead, @jacobsoboroff laughs and says "it sounds a little racist to me!" https://t.co/67xx3F8ua3

Watch the entire conversation below: