Police have lost yet another tool used to monitor users of social networks.

Twitter has cut ties with a third social network surveillance firm, citing company policies intended to safeguard users against the surreptitious collection of data by law enforcement agencies, the Daily Dot has confirmed.

Previously unreported, Twitter severed the access of Media Sonar, an Ontario-based company founded in 2012, which has sold surveillance software to police departments across the United States. Nineteen local government services are known to have each spent at least $10,000 on the software between 2014 and 2016, according to documents acquired under state open-records laws.

Twitter informed the Daily Dot this week that it had terminated Media Sonar’s access to its public API in October. If the company attempts to create other API keys, Twitter said, “we will terminate those as well and take further action as appropriate.”

As with the two U.S.-based firms previously ejected, Media Sonar encroached on Twitter’s stance on spying tools by encouraging police departments to specifically monitor the activities of African-American activists, evidence of which was unearthed by the American Civil Liberties Union of Northern California.

Alongside Instagram, Twitter is one of the primary sources of geo-specific data accumulated by so-called “social media monitoring” firms, on which U.S. police agencies have collectively spent millions. After being ousted by Twitter, Geofeedia was reportedly forced to lay off at least half of its staff, while Snaptrends, rumored to have followed suit, publicly swore off aiding the government.

The impact of Twitter’s decision on the company is unclear: Media Sonar’s CEO, David Strucke, and two other staff members did not respond to multiple emails and voice messages left by the Daily Dot. Late last month, Media Sonar boasted on Twitter about receiving a small business award from the Ontario Chamber of Commerce.

Hashtags such as #blacklivesmatter, #imunarmed, and #iammikebrown are labeled in Media Sonar promo material.

Media Sonar’s website markets the company’s data-mining intelligence platform at organizations in corporate security, entertainment, sports, events management, and education. It is not immediately clear that a large portion of the Canadian-based company’s clientele is law enforcement agencies and U.S police departments. In private email exchanges made public through public records requests, however, Media Sonar sales representatives pitched the product to the Fresno Police Department in California as a cloud-based surveillance program “specifically designed for law enforcement.”

Media Sonar reports that its software has played a role in how police have responded to crime, identifying locations associated with drug networks and identifying witnesses—a common justification for purchasing the software among law enforcement agencies, in addition to disaster response and the protection of visiting dignitaries, according to emails and other documents reviewed by the Daily Dot.

The software primarily uses Twitter’s public data to provide police with a spying service that, the company boasts in its budgetary proposals, can help officers and investigators “avoid the warrant process” in identifying an individual’s social media profiles.

The powerful platform allows users to begin to build case files on persons of interest that profile the individual’s behavior by analyzing posts and developing a web of user associations, a process commonly referred to as “link analysis.” According to the Fresno PD correspondence, part of what allows the software to do this is an “artificial intelligence” program that can “analyze context, phrases, and emoticons” as “predictive features.” Law enforcement can begin to see trends associated with individuals, from what products a person likes to typical locations via geo-tagged posts.

What’s more, the company claims that end users of its cloud-based service can do this all “covertly, bypassing the need for fake accounts” and presenting data in a way that can be searched by topic, user ID, location, and time. Information on how this is technically made possible is not publicly available and was not discussed in detail in the documents reviewed by the Daily Dot.

The company is, understandably, media shy. The proposal’s terms and conditions stipulate that agencies using the platform must avoid disclosure of the Media Sonar brand or methodology, instead encouraging clients to refer to the software as a “proprietary search engine” or “internet tools” in court. The company goes on to state that “general widespread media attention to the platform could result in a significant decrease in efficacy and the overall business model.”

Of course, Media Sonar is but one of many companies offering surveillance tools that can intercept, gather, and analyze social media posts; the company stands out, however, for having brazenly advertised its software in private talks with police as useful for monitoring activists across multiple social networks. 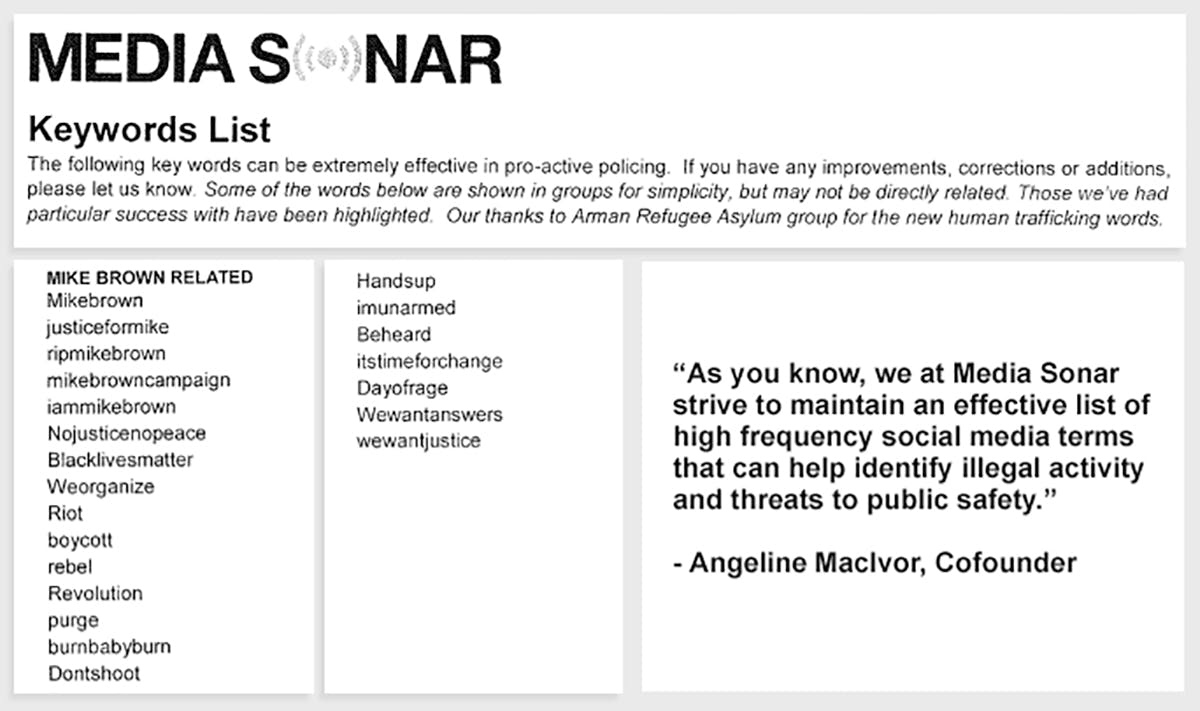 In promotional documents sent to Fresno PD, Media Sonar provided a comprehensive list of targeted keywords that include a section of ‘Mike Brown Related’ terms. This sub-section of keywords is directly associated with the social media activity of activists who protested online, in the streets of Ferguson, Missouri, and across the U.S following the fatal shooting in 2014 of an unarmed black teenager by a white police officer. Hashtags such as #blacklivesmatter, #imunarmed, and #iammikebrown are labeled in Media Sonar promo material as effective Twitter keywords in identifying “illegal activity and threats to public safety.”

Using this data, it’s possible to use social networks like Twitter to target and profile protest leaders and activists involved in First Amendment activities. This puts Media Sonar in direct conflict with Twitter’s recent anti-surveillance stance, as well as its expressed “commitment to social justice.”

According to the Brennan Center for Justice at New York University School of Law—which last month began an ongoing project analyzing police records obtained by the ACLU, MuckRock, and the Daily Dot—at least 151 police departments, cities, and counties have collectively spent millions of dollars on social network surveillance, with agencies in Florida and California, for example, throwing hundreds of thousands of dollars at surveillance tools over the course of a few years.

“Since the International Association of Police Chiefs has found that over 300 law enforcement agencies across the country use social media for listening or monitoring, and over 400 use it for intelligence purposes,” the Center noted, “these numbers undoubtedly understate the true total, both in number of jurisdictions and in overall expenditures.”