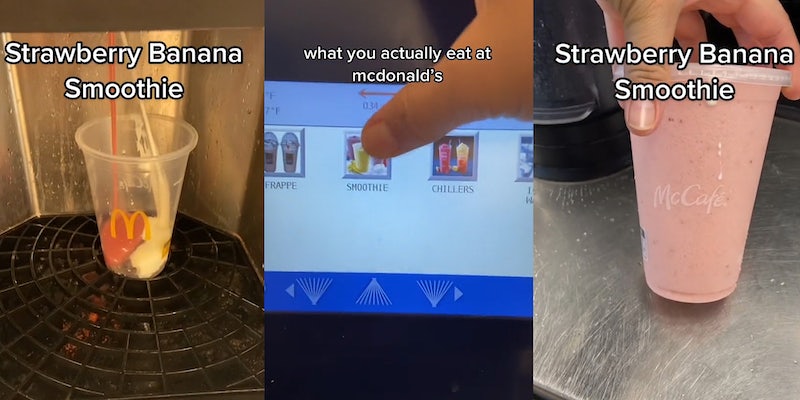 ‘Nobody thought y’all was back there cutting up strawberries’: McDonald’s employee exposes strawberry banana smoothie as not having either ingredient

'It's called fast food for a reason.'

A McDonald’s employee shows what allegedly goes into the fast-food restaurant’s strawberry banana smoothie in a viral TikTok.

Heydi Macias (@heydij01) posted a video of a strawberry banana smoothie being made at McDonald’s on August 3. In it, she hand-selects the type of smoothie and size on a machine via a touch screen. Then, pink and yellow liquid pour into a plastic McDonald’s cup before being covered with crushed ice. Macias blends the mixture and shakes it vigorously to show the end result of the “strawberry banana” smoothie.

“What you actually eat at McDonald’s,” Macias wrote in the video’s overlay text. Her video has almost 3 million views as of Thursday.

Macias has posted many videos since showing the ingredients and steps to make many popular McDonald’s items such as sweet tea, frappes, slushies, and other types of smoothies.

Many commenters assured Macias that they weren’t under the impression that cut-up fruit went into McDonald’s smoothies.

“None of us were thinking it’s a nutrition bar,” one user commented.

“Nobody thought y’all was back there cutting up strawberries,” another agreed.

“No way!! I thought you guys grew organic fruits cut them in store and then blended them,” a user wrote sarcastically.

Other commenters identified themselves as McDonald’s employees—and some said the locations they work at don’t make strawberry banana smoothies the same way.

“At my McDonald’s we just have a smoothie mix already done and it gets blended in a blender,” one user commented.

“At mines we got everything new,” another commented. “So it does it for us.”

“I watch [these videos] all the way through as if I don’t work at Mcdonald’s,” another wrote.

The Daily Dot has reached out to Macias via TikTok comment and McDonald’s via email.