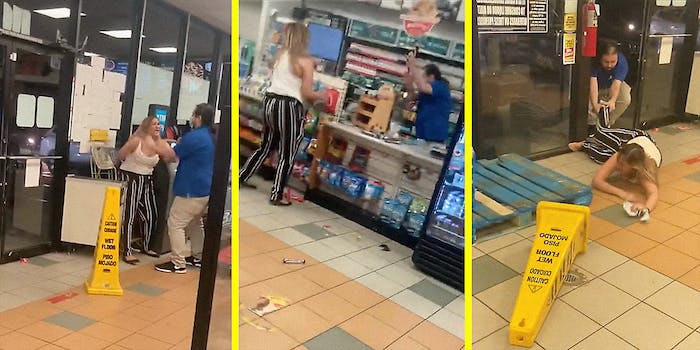 'This is a person who is desperate and not being heard.'

A viral TikTok video shows a maskless woman tearing down merchandise displays after the manager of a convenience store after the manager denies her help. She was dubbed an anti-masker “Karen” on Twitter, but there appears to be more to the story.

The clip posted to TikTok by @nuevecinco6 was been viewed over 50,000 times but deleted on Wednesday. The video showed the woman in the San Juan, Texas, convenience store throwing a fit; however, it’s unclear why. She knocks food and other merchandise and, at one point, climbs over the counter to hit the cashier.

The maskless woman cries for “help,” but it’s unclear what she needs help with. The manager demands she leave the store and says, “I don’t give a damn whether she gets help or not.”

The comment sets her back off, and it doesn’t appear to be about masks or not getting service. She tells him, “I hope your daughter, or your mother, or your grandmother gets fucking raped,” she says. “And walks all the way over here… to ask you for help.”

On social media, some people interpreted her statement to mean that she had been sexual assaulted and was asking the man for assistance. Her behavior could be a destructive cry for someone to help tend to her trauma, some speculated.

Her words could be possibly be interpreted that she, herself, was perhaps a recent victim of sexual assault and asked the man for assistance. “This is a person who is desperate and not being heard,” one user wrote.

But from the video, it’s unclear how the situation in the store started and why. The person who’s filming the altercation hands the woman a mask, suggesting she walked in with one.

The manager continues to repeat that he does not care about her situation and wants the woman out of the store. “I bet you’ve never had to deal with shit in your fucking life,” the woman yells, throwing items while climbing over the counter.

A second clip shows the manager attempting to pull the woman out of the store by her feet. The woman yells, “I’m here looking for help.”

The person who uploaded the video alleges that the woman kicked and bit police officers when they arrived; however, there’s no proof that the TikToker filmed the video or that police were on site.

The San Juan Police Department did not immediately respond to the Daily Dot’s request for comment.