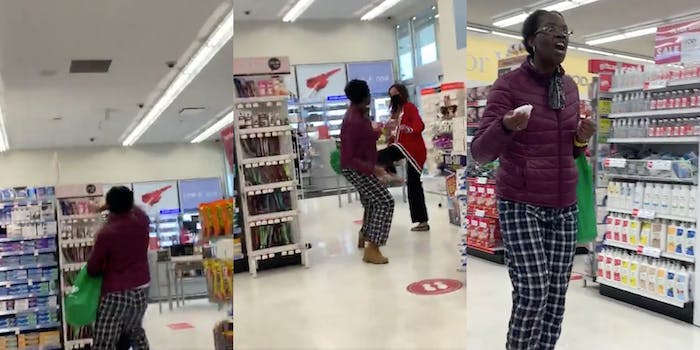 'I know you have to know martial arts, so do I.'

A video trending on Reddit shows an anti-mask “Martial Arts Karen” trying to fight an employee in a Canadian drug store and threatening her with her own bloody tissue.

The video starts with Karen trying a weird form of martial arts and attacking an employee in a Shoppers Drug Mart store in Toronto, Ontario. She can be heard mocking the Asian employee with wildly racist and stereotypical “hi-ya” sounds with each strike, though she does not appear to hurt her.

According to original poster u/Lubricant_Piano, Karen became belligerent when the manager and staff told her she needed to wear a mask to walk around the store. The employee then tells Karen to “get the fuck out.” But the angry patron doubles down on the racism, telling the employee, “I know you have to know martial arts, so do I.”

Karen tells the employee she will leave but asks why she’s being followed. At this point, the employee chases Martial Arts Karen out of the store.

The employee warns her that there would be trouble if she came back. But Karen says she has proven her peculiar, untrue, and unnecessary point: “I just used you to demonstrate to the fucking officer I know martial arts.”

Then, Karen pulls out a tissue that apparently has her own blood on it and threatens the employee.

“Now, there’s my fucking blood. Do you want to come next to me again? Fuck off!” Karen screams.

One of the Redditors said they didn’t know Karens could be Black, but that person had their horizons expanded.

As u/3beachtree wrote: “Karen’s can be any race. They just tend to be middle-aged to old white women.”