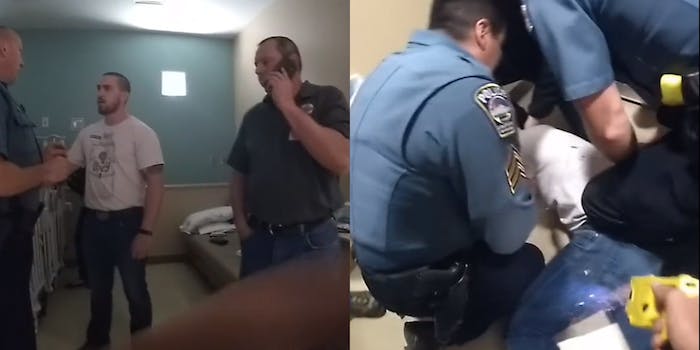 ‘Felt like I was getting ready to go on patrol in Afghanistan’: Video shows Marine being tased by police in his daughter’s hospital room

Police body cam video from 2019 shows police dragging down and tasing a Marine veteran after unlawfully demanding his phone as evidence for an alleged investigation.

According to a report this week from the military news outlet, Task & Purpose, Marine veteran Carl E. Andersen Jr.’s daughter, Charlotte, “was severely injured when his fiancé Carissa Hiteshew, who was five months pregnant with his son at the time, accidentally struck her with a car.” While her injuries weren’t life-threatening, she sustained a crack in her skull, requiring admission into an intensive care unit.

A detective from the Teller County Sheriff’s Office arrived and “demanded that both Anderson and Hiteshew hand over their phones without explaining why.” Andersen apparently refused, per the report, and the deputy came back with officers from the Colorado Springs Police Department. In the video, each of them appears ready to get physical with Andersen.

“When they walked into the room, it sort of felt like I was getting ready to go on patrol in Afghanistan,” Andersen explained to Task & Purpose. “I had just had this deep-seated feeling of: ‘Well, something is about to happen here, and it’s not going to be good.'”

Officer Vito DelCore, seen via his bodycam, attempts to take the phone out of Andersen’s pocket. When Andersen backs away, Officer Todd Eckert tells him that he’s “gonna hit the ground real hard.”

They tell him he will be charged with obstruction, though he hasn’t been presented a warrant and has no lawyer present. Additionally, he had not given consent, nor had he been charged with a crime.

They start to circle, as one of the officers says he wants to get behind Andersen so that no one else will be harmed, which suggests they will use force.

“I’m going to go behind you because I don’t want anybody behind you getting hurt,” says DelCore.

As they close in, Andersen struggles, and DelCore uses his Tazer on Andersen to take him down to the ground. Then, for no discernable reason, he’s tased again. All of this has taken place in the same room Andersen’s daughter is resting and over a cell phone.

“That is enough,” screams Anderson.

Anderson’s father, virtually helpless in the video, tells DelCore: “What you’re doing is not right!”

Again, it did not appear from the video they had been charged with any crime. No charges were filed against Andersen or Hiteshew for the child’s injury.

As a result of the altercation, Andersen filed a lawsuit against the City of Colorado Springs, Teller County, and the four officers on the scene.