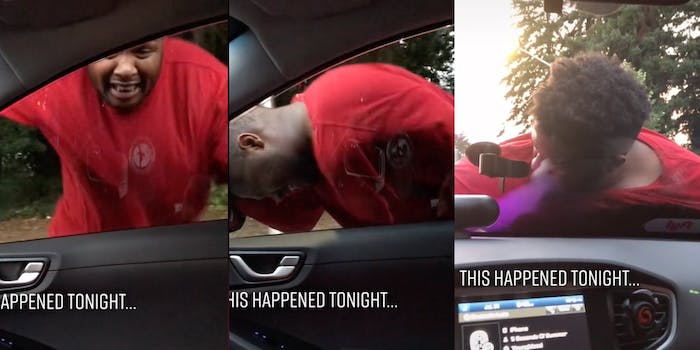 At one point, he even plops himself on the hood of the woman's vehicle.

A TikTok video of a man in apparent distress trying to get into a female Lyft driver’s car has sparked a debate over whether she should have let him in.

Posted by @thedevilsadvocates, the video shows a man in a red shirt first grabbing her door and mirror before plopping himself on the hood of the car. The driver and her passenger can both be heard in the video as the passenger calls the police. The video, first of two about the incident, was posted on Aug. 1 and has gained 2 million views on the platform so far.

A followup video states the driver was informed by police officers after they arrived that they were looking for the man after an “incident” earlier that day.

In the comments section of the video, a debate was sparked between viewers over what they would have done. Some are claiming they would have let him in their car to help him, while others say calling the police was the right move.

“What I don’t understand is why you wouldn’t help him,” one commenter wrote. “It’s literally that simple just open your door he’s begging.”

Others pointed to his desperation as a cry for help.

“Geez guys something desperate was happening he was begging why didn’t you ask him what was wrong and stop the car if somebody’s dragging on it,” one commenter wrote.

Other commenters defended the woman, saying it was unreasonable to expect her to let a male stranger in her car.

“People on the comments acting like she did wrong.” one wrote. “You did an amazing job!!! Didn’t injure him and protected yourself and your passenger.”

“So y’all are saying she should’ve let him in her car? Did y’all miss the stranger danger part of kindergarten,” another questioned.

The Daily Dot has reached out to @thedevilsadvocates and Lyft.