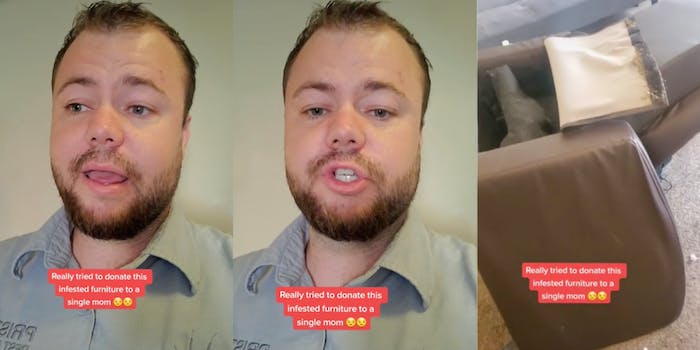 He said that when he catches a client attempting to donate or sell infested items, he confronts them.

A popular exterminator on TikTok said in a viral video that a client of his attempted to donate bed bug-infested furniture to unknowing recipients.

The TikTok was posted on Aug. 27 by Weston Storey, also known as @ExterminatorKing on TikTok, and it has since received 344,000 views.

“Throw that shit in the parking lot,” Storey recalls telling members of a church who were picking up the furniture to give to a single mom. “You don’t want any of this.”

In the TikTok video, Storey says that he usually suggests clients of his hire a dumpster service to pick up the infested furniture from their house. Instead, he recalls that the client said “fuck it” and decided to donate the stuff.

Storey goes on to show just how infested the items are—complete with visuals that aren’t for the faint of heart.

He says he planned to have a conversation with the client about donating the furniture.

“I’m gonna blast this place on everything,” says Storey. That’s a fucking terrible thing to do.”

Storey told the Daily Dot via email that many of his other clients try to donate—or even sell—infested furniture.

He also warned viewers that infested items are sometimes donated to Goodwill and Salvation Army. “Places donate because they get a little tax exempt thing for making the donation,” regardless of whether or not the items are safe to be donated.

“That’s why so many Goodwills, Salvation Army, or other of the larger non-profits actually don’t even pick furniture up anymore in a lot of states,” Storey told the Daily Dot. “Because bedbugs are such a huge problem.”

Storey told the Daily Dot that when he catches a client attempting to donate or sell infested items, he confronts them and does his best to “stop it from happening.”

“A lot of people are just really uneducated about bedbugs and assume the issue isn’t that bad,” Storey told the Daily Dot. “Or they think a can of Raid will fix it.”