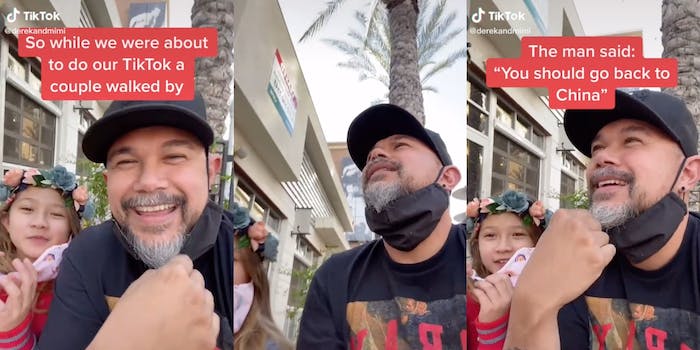 Man tells TikToker, his young daughter to ‘go back to China’ as they try to film video

'Definitely something I never wanted Mimi to see or witness in life.'

A shocking video uploaded to TikTok on Friday appears to show a man and his young daughter being told to “go back to China.”

Shared by the father-daughter TikTok duo known as Derek and Mimi, the video shows the pair discussing an upcoming dinner when the unknown man approached off-screen.

“So while we were about to do our TikTok a couple walked by,” @derekandmimi wrote. “The man said: ‘You should go back to China.'”

Unsure of what he had just heard, Derek asked the man to repeat himself.

Derek says that’s when the man dropped his shopping bags, repeated the phrase, and began walking towards him and his daughter.

As Derek walked out of frame, Mimi can be seen looking at the camera before the video ends.

“This was pretty intense just because Mimi was with me,” a caption written by Derek read.

The video has thus far been viewed more than 2.1 million times on TikTok alone.

Fellow TikTok users flooded the comments shortly after, expressing shock over the encounter.

“This absolutely breaks my heart, man,” TikTok user Rhett Scott wrote. “You two do not deserve this. No one does. You two are amazing.”

In response to the comments, Derek stated that his biggest concern was his daughter having to witness such intolerance and racial hatred.

“Definitely something I never wanted Mimi to see or witness in life,” Derek said.

It remains unclear what ultimately happened after the video ended. The Daily Dot reached out to Derek over TikTok and Instagram but did not receive a reply by press time.

The video is yet another disturbing example of the anti-Asian hatred that has seen a spike in recent months.