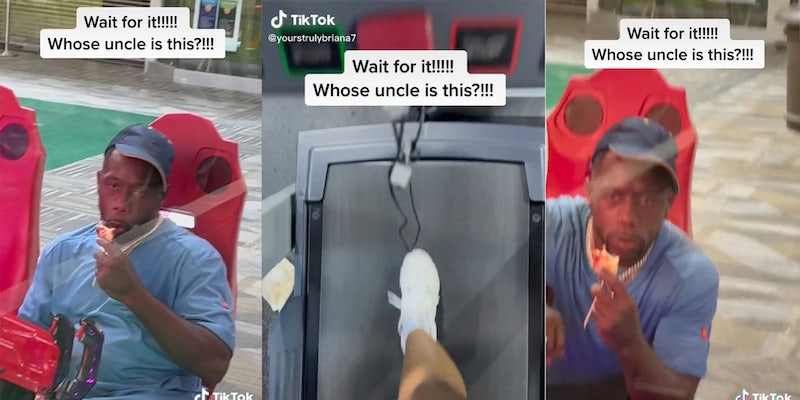 ‘Not with the wedding ring on’: Man filmed intensely staring at woman while she works out 

A woman filmed a man intensely staring at her while she worked out at a gym inside of a mall. She later said he watched her for over 20 minutes.

Briana (@yourstrulybriana7) posted a video Sunday walking on the treadmill at a gym, in which she pans to a man outside the gym who is watching her through a window as she works out.

@yourstrulybriana7 Im just trying to do my cardio smh! The only bad thing about the gym being connected to a mall 😩#BigInkEnergy #fyp ♬ T-Pain Mashup (with Kurt Hugo Schneider) – T-Pain

“I’m just trying to do my cardio smh! The only bad thing about the gym being connected to a mall,” Briana captioned the post, which was viewed more than 2 million times by Monday.

In the video, the man is sitting at an arcade game in the shopping mall, where the gym is located. He is also eating a snack while scanning Briana up and down, at one point leaning in toward the window.

Several commenters pointed out what appeared to be a wedding ring on the man’s finger.

“Not with the wedding ring on,” one person wrote.

“I hope his wife see this,” another commenter said.

Other viewers discussed the man’s behavior.

“The fact that he’s not even trying to play it off,” one commenter wrote.

“He saw you recording and didn’t care ??? Lord help him. Watching like he at the strip club,” another said.

In the comments section, Briana clarified she did not know the man and said he watched her for 20 minutes.

“I thought once I pulled my camera out he would turn away. NOPE,” she wrote.